Despite its sober Gothic exterior, the Church of Saint Francis holds one of the finest examples of a Baroque interior.

Baroque design, an architectural style originated in Rome in the 17th century, is known for its sumptuous decorations, often bordering on the opulent. When it comes to church interiors no church can perhaps rival the “Baroqueness” of the Church of Saint Francis in Porto, Portugal, decorated with more than 650 pounds of gold dust. 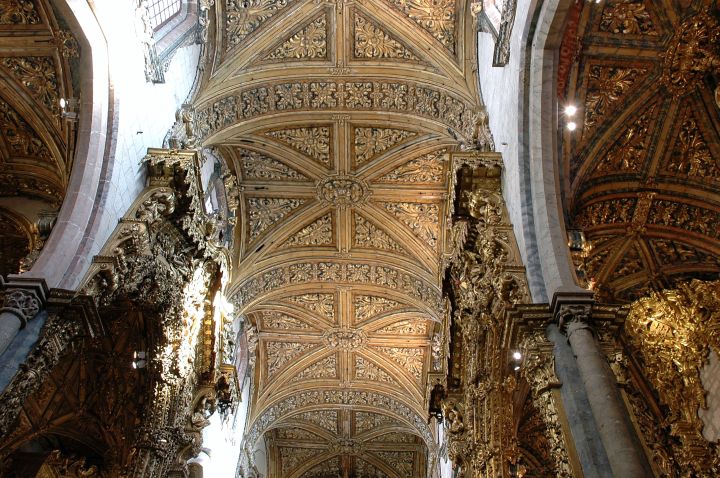 Listed as a UNESCO World Heritage Site since 1996, the “Igreja do Convento de São Francisco,” the Church of the Convent of Saint Francis, was first founded as a much more sober Romanesque building by Franciscan friars in the 13th century. But following several destructive fires, it was re-designed according to Gothic style with engraved wood interiors. It wasn’t until the 17th and 18th centuries that, that church interiors began to be decorated in Baroque style across Europe.

Portugal’s best carvers and gold workers were hired for the job, which took decades to complete. Each of the three internal naves, including the roofs, pillars and window frames, was decorated with elaborate engravings and coated with gold dust. The sharp contrast between its sober Gothic exterior and its glittering internal naves makes the Church of Saint Francis one of the most intriguing examples of Catholic architecture in the country.

When entering the church, visitors can follow a clockwork tour to discover some of its finest decor elements. On the left hand side lies the burial chapel of Luis Alavare de Sousa, a local nobleman, decorated with one of Portugal’s oldest frescoes representing the Virgin of the Rose. In the center lies a polychrome granite statue of St. Francis, dating to the 13th century.

Of all the elaborately decorated altarpieces, the most important is the 1718 polychrome wood carving depicting the “Tree of Jesse,” an illustration of Jesus’ family tree with twelve kings of Judah connected through branches of the tree to the main body, that of Jesse, father of David and King of the Israelites.

But fires were not the only challenges faced by the Church of Saint Francis in its seven-century long existence. When Napoleonic troops invaded the city of Porto in the 19th century, Franciscan friars were forced to flee, leaving soldiers free to raid part of the church’s golden engravings. And when the Portuguese civil war reached its peak, during the 1920s, the church was bombed and suffered severe damage.

Following restoration work, the Church of St. Francis was returned to its former glory and is currently considered one of the finest examples of gilded wood carving in Portugal. Visitors may also be interested in visiting the catacombs, which house the remains of Franciscan friars and local devout families, as well as the annexed museum that includes a permanent collection of art works related to the Order of Franciscan Friars in Portugal.

The Church is open for visits every day from 9 a.m. to 8 p.m. To get there, get off at metro stop “Sao Bento” and walk down Rua de Mouzinho da Silveira street for about 10 minutes. The church will be on your right.