Turkish couple use their wedding banquet to feed 4,000 Syrian refugees 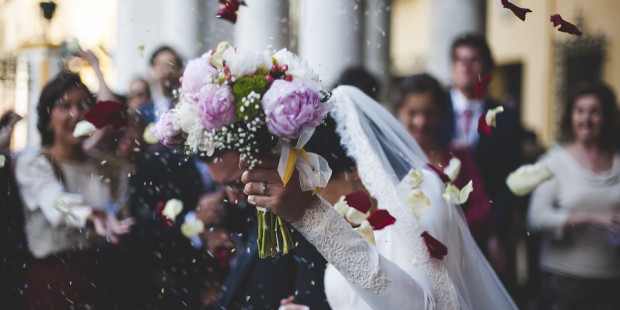 They hope their example will inspire others.

Not long ago, Aleteia published a story about a couple in Brazil — Victor and Ana Paula Ribeiro — who decided to use their wedding banquet to feed 160 poor children instead of having a traditional celebration. Their story has gone viral. However, it turns out they weren’t the first to do something of the kind: a story recently resurfaced about a Turkish couple who did something similar, on an even larger scale.

In 2015, Fethullah Üzümcüoğlu and Esra Polat were getting married in Kilis, a city near Turkey’s southeastern border—the border shared with Syria, where a civil war started in 2011. Aware of the plight of Syrian refugees  — in 2015, Turkey was hosting approximately two million of them — the couple decided to invite some 4,000 of those neighbors in need to share their wedding banquet, reported Raziye Akkoc of The Telegraph.

Sharing the joy with those in need

It was Ali, the father of the groom, who came up with the idea of sharing the celebration with the refugees. He told a local newspaper that “he hoped others would do the same and share their wedding celebrations with their Syrian brothers and sisters,” the Telegraph reported. He told the paper he was happy that the couple could begin their lives together with this “selfless action.”

Photos of the event show the bride and groom, in formal wedding attire, serving food to the guests from a food truck. To make this happen, they worked with Kimse Yok Mu (“Is Anybody There?”), a faith-based Mulsim charity that was providing food for 4,000 refugees in Kilis, along with many more refugees in Turkey and throughout the world. In this case, Fathullah and Esra used the money they had received as wedding gifts from their families to fund the special meal.

“I was shocked when Fethullah first told me about the idea but afterwards I was won over by it. It was such a wonderful experience. I’m happy that we had the opportunity to share our wedding meal with the people who are in real need,” said the bride to i100.co.uk, quoted in the Telegraph’s article.

The groom said he was very satisfied when he saw the refugees enjoying the occasion. “Seeing the happiness in the eyes of the Syrian refugee children is just priceless. We started our journey to happiness with making others happy and that’s a great feeling.”

That was four years ago, and sadly, the situation hasn’t improved. The civil war continues; according to the United Nations, the number of Syrian refugees in Turkey has reached 3,666,059; and Kimse Yok Mu, the charity that was helping refugees and carrying out other aid work throughout Turkey, has been shut down in that country by the government of President Recep Tayyip Erdoğan due to political situations too complex to explore here.

As individuals and families, there isn’t much we can do on the larger scale to resolve the multiple refugee crises and problems of poverty throughout the world. However, we can follow the example of Fethullah and Esra Polat (and of the Brazilian couple Victor and Ana Paula Ribeiro) and share some of our own blessings with people in need who are near to us. If we can bring joy and consolation to even just one person in need, we will have done it not just to them, but to Christ (Matthew 25:40).

Read more:
Refugees in Tradition and the Magisterium