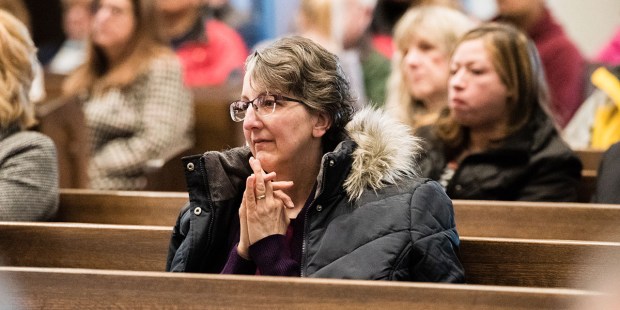 Keep your feet planted in your local parish, but don’t hesitate to spread your wings …

While I love my local parish, I’ve been having a lot of fun being a “roaming” Catholic lately. I learned the term from a neighbor who regularly drives down the road to visit a class here and a community fundraiser there. Now, I’m not advocating “hopping around” on Sunday mornings – not at all, as that practice makes it hard to be a meaningful part of a community. But checking out a guest speaker in the next town on a Friday night? Yeah, that’s a real break from talking to my kids about Minecraft.

Speaking of kids, our local options didn’t offer anything in the way of a youth group – something hard to scrape together with a largely geriatric population. In the past, I’d have tried to make one magically appear by pasting on a fake smile and posting up flyers. But the fact is that I need someone else to fill this void in our lives right now.

So I loaded my teens in the van last winter and hit up an already established youth group about an hour away; a long drive, but it’s been worth it. While we still regularly attend our local parish on Sunday mornings, my kids have had a blast widening their circle of friends (so have I!). My teens were especially inspired by joining that parish’s ski club; young priests on snowboards – something my local parish simply can’t offer.

Roaming through time as well …

Not only has my “roaming” journey led me to join a discussion group in the next town over, but I’ve been searching for friends throughout the centuries as well. So even though I may feel like I don’t have a lot in common with the other moms at my parish right now, Servant of God Elisabeth Leseur and I have been real tight lately. I’ve been comforted to find that she too had some serious challenges in her marriage (who doesn’t?), but that she handled them with fortitude and grace.

Speaking of Elizabeth, her husband Felix was an atheist whom she positively adored, praying faithfully for his conversion for years. [Note: Felix kept the fact that he’d abandoned his Catholic faith from her until after their wedding.]

While Elisabeth died from breast cancer in her 40s and never got to witness the fruits of her labor – her husband’s conversion and eventual ordination to the priesthood – I’m sure she rejoices in heaven. And while I can’t turn to Elisabeth as we walk out of Mass to discuss the priest’s homily, I carry her biography in my purse and ask her to pray for me often.

Roaming throughout space and time – it’s just one of the awesome things about being Catholic (a term that means “universal”). Our community isn’t limited by a building’s walls or geographical distance or even by the passing of years; remember that we believe in “the communion of saints” and that these saints are “alive in Christ.”

By widening one’s scope to the parishes and people down the street, and maybe even around the world (past and present), you’re sure to learn something new and make a few friends in the process!