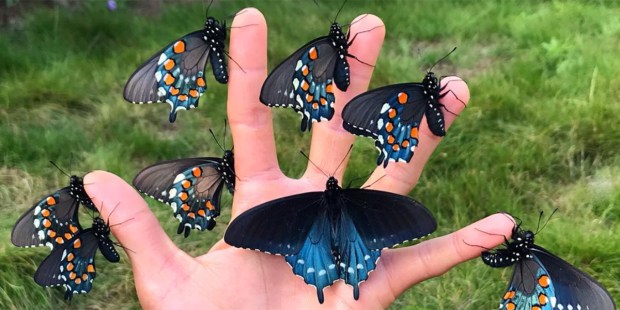 Through tedious hard work, Tim Wong shows us what it is to be a steward of God’s creation.

There are many stories in the news of the declining number of species on the planet. In fact, NPR published an article this week reporting on how the bird population of North America and Canada has dropped by 3 billion over the last half-century. With such alarming figures it’s reassuring to hear of individuals who are doing their utmost to help save endangered species.

One such case is Tim Wong, from California, who is using his skills as an aquatic biologist to save a rare butterfly from extinction: the pipevine swallowtail. As a young boy, Wong was introduced to the butterfly kingdom at school, where he became fascinated by the transformation of the caterpillar into a butterfly. This led him to spend hours catching the beautiful winged insects and learning all about their ways. It was this same childhood passion that led him to eventually create a haven for these rare butterflies that, in their caterpillar form, feed on the California pipevine, a plant that is equally scarce to come by.

Some of our last few California Pipevine swallowtails for 2017! While typically more abundant during the spring and summer months in California, these guys are the result of a small number of adult butterflies that eclosed in November (a bit late but this group is taking advantage of a fall flush of growth). Fingers crossed that these guys pupate soon because ❄️ ⛄️ 🌬 is coming! #battusphilenor #californiapipevineswallowtail

Thanks to his skills, Wong was able to take a clipping of the plant from the San Francisco Botanical Garden. He started the plant in his garden and built a perfect habitat for the butterflies to flourish. “The specialized enclosure protects the butterflies from some predators, increases mating opportunities, and serves as a study environment to better understand the criteria female butterflies are looking for in their ideal host plant,” he explained to Vox.

Although the numbers of butterflies were dwindling in San Francisco, Wong collected a number of caterpillars from private residences outside of the city and took them to the new enclosure. There the caterpillars set about chomping away on the newly grown pipevine plants and eventually formed chrysalises. After a few weeks the butterflies emerged, although in some cases the chrysalis remains dormant for up to two years before revealing its butterfly state to the outside world.

Complete metamorphosis. 🐛🦋😎Every year I have a tradition to recreate the photo that started it all. At this time of year, we can find California Pipevine swallowtails in our backyard in every stage: eggs, caterpillars, chrysalis, and adults! #completemetamorphosis #butterfly #californiapipevineswallowtail #battusphilenorhirsuta #californiapipevine #caterpillar @natgeotravel @natgeo

After all that painstaking work, the butterfly lives only two to three weeks. In that time it mates and the females lay their eggs on the same pipevine plant. Ever vigilant, Wong carefully picks up the eggs and takes them inside so they incubate away from any predators. After that, the cycle begins again with the now-caterpillars being taken by Wong to the San Francisco Botanical Garden’s “California Native” exhibition.

Wong’s work is truly a labor of love that takes dedication and specialized knowledge. Through his careful treatment of the caterpillars and their food source, he has managed to bring the butterfly back to San Francisco for the first time in decades. “Improving habitat for native fauna is something anyone can do,” Wong said. “Conservation and stewardship can start in your very own backyard.” That same stewardship is what we are all asked to perform as Christians in caring for God’s creation.

You can read the whole article by Zachary Crockett for Vox here.

Read more:
What Pope Francis has said about the environment, in 10 quotes