The spiritual meaning of St. Michael’s name reminds us how we should live our lives 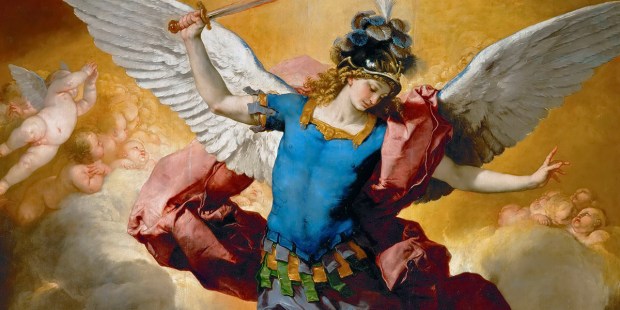 The name “Michael” is packed with meaning that helps us look at our lives differently.

St. Michael is widely known as the archangel who fought back Satan and cast him from Heaven. It is believed that his name, Michael, is closely associated with this spiritual battle and reminds us all how we should live our lives.

According to the St. Andrew Daily Missal, “The name Michael means, in Hebrew, ‘who is like God?’ and recalls the battle in heaven between ‘the prince of the heavenly host’ and the devil, a battle which began with Lucifer’s rebellion and continues down the ages.”

It is believed that Michael’s battle cry was exactly that — “Who is like God?” — enacting judgement on Satan’s desire to be “like God.” Many images of St. Michael contain this phrase in Latin on his shield, “Quis ut Deus?”

This is in fact the definition of Michael in the Hebrew language and further recalls the temptation in the Garden, when Satan tried to lure Adam and Eve into taking the fruit by saying, “you will be like God.”

The meaning of St. Michael’s name reminds us that we should not try to be like God. This may seem like an obvious statement, but how often do we “play God” in our lives?

We tend to want to be in complete charge, and often get upset when things don’t go our way. At a subconscious level we somehow think that we rule the world and should control every aspect of it.

In other words, the more prideful we become, the more “like God” we think we are.

The true heart of a Christian is to be close to the ground, “humble,” in every sense of the word. This does not mean we need to let others trample over us like a used carpet, but that we need to recognize our place in the world as created beings, entirely dependent on God.

When we truly realize that and let it sink into our heart, our lives will radically change. The next time something goes wrong in our lives, instead of getting angry and doing something even worse, we will be able to accept it from God.

Humility is the key to holiness, and even St. Michael’s name reminds us of that simple fact.

Read more:
The “relics” of Saint Michael the Archangel

Read more:
A forgotten prayer to St. Michael against the assaults of evil