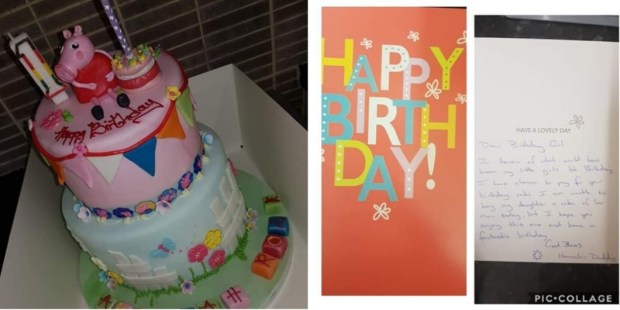 On what would’ve been his daughter’s birthday, he wanted to pay for someone else’s cake.

Losing a child is such a terrible and intense suffering that it’s unimaginable for anyone who hasn’t experienced it. Pope Francis has spoken more than once about it, in particular during a general audience in 2015, when he said:

“For parents, surviving their own children is particularly heartbreaking; it contradicts the fundamental nature of the very relationships that give meaning to the family. The loss of a son or daughter is like time stopping altogether: it opens a chasm that swallows both past and future. Death, which takes away a little child or young person, is a blow to the promises, to the gifts and the sacrifices of love joyfully brought to the life we gave birth to.”

This is the kind of suffering experienced by the father of Hannah, a child in England who lived only one week after birth. However, instead of letting his pain and sorrow get the upper hand, on what would have been her first birthday he did a small but marvelous and inspiring gesture. He didn’t close in on himself, or argue with the world and with God; he generously paid for a birthday cake for a little girl he didn’t know. Apparently, he went to the bakery and asked if there was some little girl celebrating a 1st birthday whose cake he could pay for anonymously.

When the little girl’s mother and aunt went to pick up the Peppa Pig-themed confection, the staff described how an “absolute gent of a man” had gone in to the shop to “pay for some other little girl’s cake, as he couldn’t pay for his own,” since his own daughter had died at the age of only 8 days. We can just imagine their surprise!

Actually, we don’t need to imagine it; the little girl’s aunt, Léá Ní Bhríaín, shared the story on Facebook:

The generous father also left a birthday card with a simple message full of love and sweetness that has been shared thousands of times on the web. The card reads:

In honor of what would have been my little girl’s 1st birthday, I have chosen to pay for your birthday cake. I am unable to buy my daughter a cake of her own today, but I hope you enjoy this one and have a fantastic birthday.

Truly, death does not have the last word! Hannah’s Daddy (he remains otherwise anonymous) proves it to us with these thoughts that are a true act of hope. They reflect someone who isn’t letting himself be poisoned by suffering, and hasn’t fallen into the void of hate, but has held on to hope, and love.

Attitudes like this reminds us that Jesus on the Cross has conquered death, and that one day, thanks to Him, we will all be reunited.

Read more:
Pope Francis to Families Mourning the Loss of a Loved One: Jesus Is With You

Read more:
A child’s death and the loss of innocence