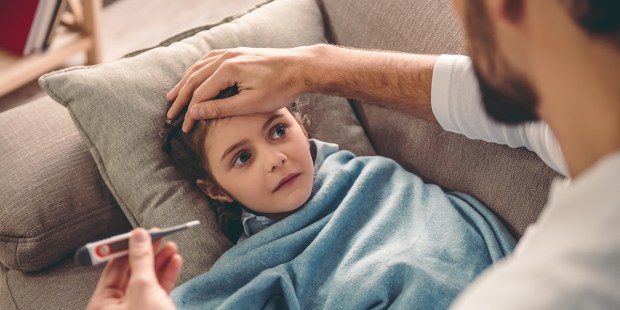 Antibiotic overuse has resulted in some serious threats to our children’s heath, so try and let their immune system work first.

School came back with a bang this year, am I right? We’ve only just passed the first quarter and my kids have already had two mild stomach bugs, one ear infection, a few suspicious sore throats, and about 1,000 colds.

With the temperature dropping, cold and flu season is definitely upon us. This is the time when parents tend to make doctors appointments at the drop of a hat – our kid wakes up with a runny nose and a slight fever, and our impulse is instantly to call our pediatrician.

But that might not be the right move. The vast majority of these colds, earaches, sore throats, and tummy troubles are caused by viruses. Aside from the heavy hitting antivirals reserved specifically for influenza A and B, we have no way to treat viral illnesses. We simply treat the symptoms and attempt to support the immune system as much as possible — plenty of fluids, lots of rest, maybe some elderberry supplements or cough drops. That’s about all we can do. There are simply too many viruses to come up with an effective broad-spectrum antiviral treatment, and even if we did, viruses mutate rapidly. Which means that any anti-viral treatment we could offer would likely only be effective for the first wave before the virus would adapt by mutating into a new, more virulant form that can overcome the antivirals.

We know this because it’s been all over the news and shouted from on high in our doctor’s offices for the past few years. But most of us were raised in the era of “antibiotics for everything!” Parents would take kids into the pediatrician at the first sign of illness and be given penicillin or amoxicillin for everything from a sore throat to an ear infection. Usually the child in question would start to feel better within a day or two, leading us to believe that the antibiotics had done the trick.

But actually, that trick didn’t work in our favor. Two to three days is the normal span for most acute phases of viral illnesses. After this, the body has learned more about the invader and responds by targeting it with more and better antibodies. Once the immune system picks up it does its job with a vengeance, the virus rarely stands a chance. That means that kid would have been feeling better on the same day without the trip to the pediatrician and the unnecessary antibiotic. What’s worse, that antibiotic likely did far more harm than good, since most antibiotics are broad-spectrum (think Cipro or Z-packs). They target a wide variety of bacteria and wipe them out indiscriminately – including the countless strains of gut bacteria that protect us. That’s why kids (and adults) get diarrhea with antibiotic use – their microbiome is being systematically destroyed, and all the good bacteria that keeps things functioning is being wiped out.

Not only does this cause lingering affects on our digestive system, but it also opens the door for more pernicious gut bacteria to get a foothold. Bacteria like candida or C. diff, which would normally be shut out by the gut’s healthy bacteria, sneak in during these periods of post-antibiotic blitz and populate the now-stripped microbiome, colonizing our children’s digestive tracts with harmful, sometimes life-threatening strains of bacteria.

This is bad enough. But the other problem with indiscriminate antibiotic use is that bacteria, much like viruses, are highly adaptive. When they come up against an antibiotic, they begin to develop ways to overcome it. The past few decades of rampant antibiotic overuse have resulted in countless strains of antibiotic-resistant bacteria, which are so strong that patients who contract them often have to be hospitalized for weeks in order for doctors to target the bacteria with the most strongest, most effective antibiotics available.

If this sounds scary, it is. The rise of antibiotic-resistant bacteria is one of the most alarming trends in healthcare today. So what does that mean for you as a parent? Quite simply, when your kid gets sick you need to let them be sick. It’s awful to see your child suffer, even when they just have a mild headache and seem a little run down. We don’t like to see them sitting sunken-eyed and listless on the couch. We want to get them healthy again as quickly as possible — but reaching for the phone to make that pediatrician appointment could very well end up doing the more harm than good.

It’s time that we as parents remember that our children’s immune systems are created by God to fight viral and bacterial illnesses effectively. Short circuiting the body‘s natural defenses with broad-spectrum antibiotics actually damages their immune systems ability to fight off infections. It makes our children’s natural defenses weaker, not stronger. In order to help our kids develop strong immune systems and live healthy lives, we need to be strong enough to let them be sick. We need to be willing to sit with them in their illness, to hold them when they’re feverish, to recognize that their body is fighting off an illness in the best way it can — and that all those symptoms are a direct result of their immune system actively working to fight off infection.

Of course, there are going to be times when that phone call to the pediatrician needs to be made. Fevers that spike over 104, fevers that last for more than three days, severe vomiting and diarrhea that lead to dehydration, and complete listlessness are all signs that their body is being overwhelmed by an infection it doesn’t quite have the strength to fight off. In these instances, they do need medical intervention and it’s absolutely appropriate to take them to the doctor and get necessary treatment.

But many of us are so used to making that phone call at the first sign of illness that we’ve forgotten how to recognize when an illness goes from being mild to being serious. In order to make the right call, we need to remember how to wait. Don’t call the doctor on the first day. Unless the child is significantly worse, don’t call on the second day. If they show no signs of improvement by day 3, then make that call and get them in. Sometimes antibiotics still won’t be necessary – there have been many days when I’ve made an appointment in the morning and by the afternoon, my child was doing much better. Or days when the pediatrician took one look at them and said, “I think they can handle this one — here’s a prescription just in case, but don’t fill it until tomorrow.” On these occasions, I’ve never actually filled the prescription — by day four they were clearly on the mend.

So have a little patience this cold and flu season, and don’t automatically reach for that phone when your kids inevitably get sick. Remember, fighting off this illness means your children’s immune systems are getting stronger – and so are they.

Read more:
Let your kids take these risks in the kitchen

Read more:
How getting diagnosed with a chronic illness taught me the real meaning of strength