Adam is often referred to as “the first gardener.” What was he cultivating? 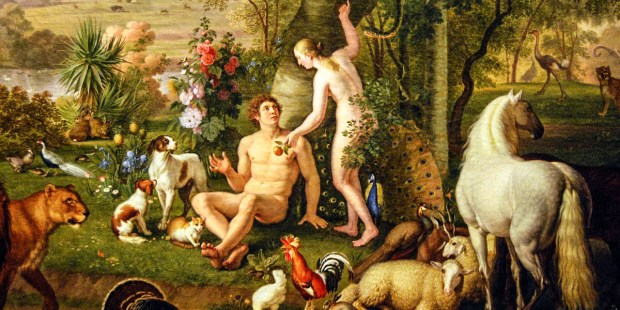 As is often the case in the Bible, translation sheds light on an interesting perspective on the human condition.

In the Christian tradition, the Gardens of Eden and Gethsemane are paradoxical places of both sorrow and grace. In her article on “Thomas Merton’s Discovery of Paradise,” Monica Weis explains that just as Eden “recedes into the background with the ejection of Adam and Eve,” there is still a promise of future restoration that shines in the horizon. The events in Gethsemane work in a very similar, almost mirroring way: if Gethsemane is the landscape in which the Passion could be said to begin (with Jesus’ arrest), it is also the place in which the path to Resurrection, through the Passion, begins. In both cases, a promise of restoration seems to somehow resist, quia absurdum, the darkness that fell over all the land, from noon on, on Good Friday (a darkness no painter has captured with greater depth than Velásquez).

However, we might wonder what were Adam and Eve doing in the garden before their ejection. Were they just strolling around Eden, like one might do on a Sunday afternoon in the park, petting the animals which, according to the book of Genesis, Adam had just recently named?

Interestingly, that doesn’t seem to be the case. Contrary to what we might be inclined to think, while in Paradise, Adam worked:

The Lord God planted a garden eastward in Eden, and there He put the man whom He had formed (…) Then the Lord God took the man and put him in the Garden of Eden to tend and keep it.

Tending and keeping are two key words here, sure. The Hebrew word for “tend” is “avad,” which can be translated as “to work” yet also “to serve as subjects.” This makes clear Adam is in a hierarchical relationship with God: he is his servant, yet in a very specific way. God assigns Adam the duty of working in the Garden as the garden’s keeper. He gives man authority, but authority is supposed to be shown in service. The Hebrew word for “keep” is “shamar,” which means, “to guard,” to “watch over,” to “protect,” and “to preserve.” Some of these meanings have been stressed by Pope Francis in his Laudato Si.

Read more:
Analyzing art: What can you see in ‘The Expulsion of Adam and Eve from Paradise’?

However, there’s one more word we should take a look at: the name of Adam himself.

The name of Adam derives from the Hebrew noun “ha adamah,” meaning “ground,” “dirt,” “soil,” or “earth.” Of all of God’s creations, which were simply “uttered” into being by God’s own voice, Adam is the only one made from soil (Gen. 2, 7):

The Lord God formed a man from the dust of the ground and breathed into his nostrils the breath of life, and the man became a living being.

Some rabbinical literature explains this difference between Adam and the rest of the animals in terms of “completeness:” while the animals were created “complete,” both man and soil were created “incomplete,” in a “basic” state: man and earth need to be developed, worked on, to reach their full potential.

In a word, they both need to be “cultivated.”

There is yet another meaning “hiding” in Adam’s name, strictly related to the matter at hand. Whereas Adam is seen as derived from “adamah,” it also contains the word “dam,” that is, “blood” in it. As the Israel Biblical Studies website explains, this implies Adam is indeed “flesh and blood” from the very beginning.

What does this combination of “earth” and “blood” in the name of the first man might mean?

According to rabbinical thought, both the “bloody” and “earthly” components of Adam’s name indicate his personal identity and dual belonging: human blood and natural soil combined imply that human beings belong to both human society and to nature, and that they are thus responsible for both: the “flesh and blood” man is, just like nature, needs to be both kept (“shamar”) and worked on (“avad”). In a nutshell, Adam was also supposed to be cultivating his own self while cultivating the earth. Both things go, indeed, hand in hand.