Eleven years after a bloody massacre, Christians in India maintain the faith 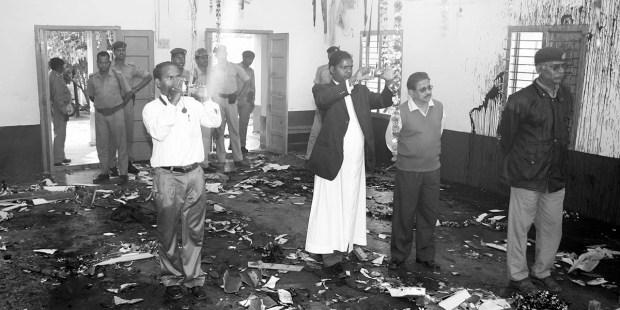 Indian Catholic journalist Anto Akkara says he is inspired by their dedication in the face of persecution.

More than 200 incidents of violence against Christians in India have been reported this year, according to the Indian branch of Alliance Defending Freedom. In many cases, the violence arises in response to reports that Christians are forcing conversion on non-Christians.

Eleven years ago, fundamentalist Hindus in one Indian state were the ones forcing Christians to convert—or trying to. And yet, in the midst of sectarian violence that claimed over 100 lives, no Christians became Hindu, according to a journalist who covered the ordeal.

“They said Christians killed the Swami, so Christianity is banned in Kandhamal.”

On August 23, 2008, a well-known Indian swami named ‎Lakshmanananda Saraswati was killed in the state of Odisha (formerly Orissa), in Eastern India. Extremists allegedly framed seven Christians for the assassination, even though Maoist rebels ‎claimed responsibility. The Swami’s funeral procession zigzagged across the Kandhamal district of Odisha, inciting anger among his devotees and stirring up anti-Christian sentiment.

“They said Christians killed the Swami, so Christianity is banned in Kandhamal,” said Catholic journalist Anto Akkara in an interview during a recent tour of the United States. “They were trying to get the Christians to become Hindu, but these poor illiterate people refused. They said ‘You can kill us, but we will not give up our faith.’ So when they were required to go to the temples for reconversion ceremonies, they ran to the jungle areas. They saved themselves, but their houses were plundered; churches were destroyed—like 300 churches in the district—6,000 Christian houses, 56,000 homeless.”

Those who refused to become Hindu were burned or buried alive or chopped into pieces, said Akkara, who has made multiple visits to Kandhamal from his base in New Delhi. “They were killed because they refused to forsake the faith,” he said.

At least 75 Christians were killed

The area is about 20% Christian. While local officials initially recognized the deaths of only 32 Christians, Akkara claimed to have a list of 75. “The police won’t certify a death unless they have a body—but many of the bodies were destroyed,” he said. “So officially they are only missing. The collector [a local official] said, ‘These are cooked-up stories; Christians are hiding them in order to get the compensation” that the state gave a family for a murder victim.

In one of several books Akkara has written about the massacre, Early Christians of 21st Century, he writes about five Christians who lost their lives. One was a young Protestant pastor who was coming back from a pastors’ conference in another state.

“He had to take a bus through a remote area [and] was warned to avoid the area because the Hindus were taking Christians to reconversion ceremonies,” Akkara said. “His bus was stopped, and people said, ‘No more Christianity here, come to the temple for reconversion.’ He said, ‘It’s my fundamental right under India’s Article 25.1, that all persons are equally entitled to freedom of conscience and the right freely to profess, practice and propagate religion.’”

Furious, the mob forced him into a pit and filled it with soil up to his neck. “They asked him if he was ready [to convert], and he said No, so they crushed his head with a huge rock,” recounted Akkara, who refers to him in the book as “St. Stephen of Kandhamal.”

Their faith has been strengthened in spite of their ordeal

Some who survived still suffer from the trauma. Two of them are Fr. Thomas Chellan, director of the Divyajyoti Pastoral Center, who was severely beaten, and his assistant, Sister Meena, who was gang-raped.

In the aftermath, Sister Meena refused to be silent, according to George J. Marlin, chairman of Aid to the Church in Need. “She went public, held a press conference in front of 200 television cameras in New Delhi and demanded an investigation into her rape,” Marlin wrote in The Catholic Thing. “Sister described everything in gruesome details and how the police tried to dissuade her from lodging a criminal complaint after the mandatory medical test confirmed the rape.”

“Maybe God wanted me to suffer with our people and become an instrument to speak up for the voiceless people of Kandhamal,” she told the media. Sister Meena concluded by publicly thanking God “for choosing me to face this humiliation and giving me the opportunity to suffer for the people of Kandhamal. I got a chance to undergo the experience of being crucified.”

As a journalist, as someone trained in law, and as a Christian, Akkara said he is inspired by the strong faith he’s reported on. “Since August 23, 2008, not one Christian has become Hindu in Kandhamal,” he said. “That is a moment of truth for the Church in India.” In fact, he said, some Hindus have become Christians as a result of the witness of the martyrs.

Archbishop John Barwa of Cuttack-Bhubaneswar, whose jurisdiction includes Kandhamal, confirmed that Christianity is growing in Kandhamal.

“They burnt our people, our houses, our churches, but the fire of the Holy Spirit filled our people with a burning love for Jesus and the Church,” Archbishop Barwa told Crux.

He has appointed a priest to research and prepare a dossier on those who died for their faith in the violence, a process that might lead to their canonization.

“Kandhamal was a tragedy, but what comes out at the end of it is the Christian faith,” Akkara said. “As Tertullian said, the blood of the martyrs is the seed of Christianity.”