It was built by order of Pope Leo XII as a tribute to the resurrection of Jesus on the eighth day.

The number eight takes on many symbolic meanings across cultures. Its most recognized meaning is that of infinity. But for Catholics, eight is associated with Jesus’ resurrection, which took place on the eighth day. That’s why in 1828 Pope Leo XII commissioned the construction of what was then the world’s largest octagonal church. Pope Leo XII, born Annibale Sermattei della Genga, hired renowned Roman architect Giuseppe Valadier, who designed the structure according to neoclassical design, featuring a lead coated dome and walls made of marble. 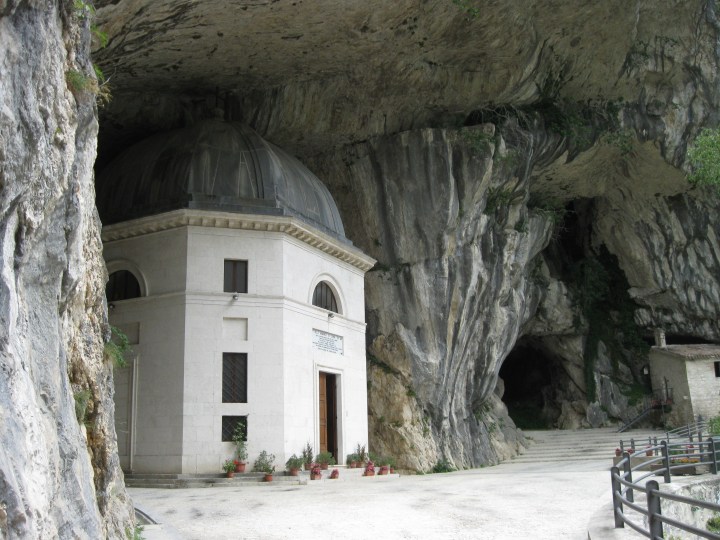 For its location, Pope Leo picked a limestone cave nearby his native town of Genga, in central Italy. Part of a series of gorgeous geological formations caused by water erosion, this cave played a key role for locals since at least the 10th century. It was here that local families sought refuge whenever the nearby villages were raided by Barbarian troops. For this reason locals often referred to as the cave as a “refuge.” Pope Leo decided to build a spiritual refuge right in a location that had been a material refuge for so many people across centuries.

The end result is the Temple of Valadier, a stunning construction that seems to have emerged intact from the floor of its surrounding cave. The contrast between the harmonious neoclassical design of the church and the rough surface of the grotto seems to suggest the contrast between spirit and matter. For a long time pilgrims from all over Europe flocked to this grotto to pray the Virgin Mary. Originally, the church housed a marble statue of the Virgin Mary with the Christ Child by Antonio Canova, which is now preserved in the nearby Museum of Sacred Art in Genga.

On the left side of the church there is a natural path that leads to the abandoned monastery of Santa Maria Infra Saxa, literally “Holy Mary Between the Stones,” an 11th-century structure made of limestone that used to be a convent of Benedictine nuns. Both structures can be reached after a steep half-mile walk up that starts at the bottom of the Frasassi complex. To get to Genga, you can get a regional train from Rome to Ancona and get off at “Genga-Saint Vittore Terme.”