Number of cardinal electors now at 128

On Saturday, Pope Francis created 13 new cardinals, 10 of whom are still under the age of 80 and thus able to vote in a conclave for a new pope. There are now 128 cardinal electors of 225 living cardinals.

After the Mass, the Holy Father and the new cardinals went by bus to the Mater Ecclesiae Monastery to meet with the pope emeritus, Benedict XVI.

After a brief greeting, in which he reminded the new cardinals of the value of fidelity to the pope, Benedict XVI, together with Pope Francis, gave them a blessing.

Afterwards, the 13 new cardinals went to Paul VI Hall and the Apostolic Palace for the Courtesy Visits, while Pope Francis returned to Casa Santa Marta. 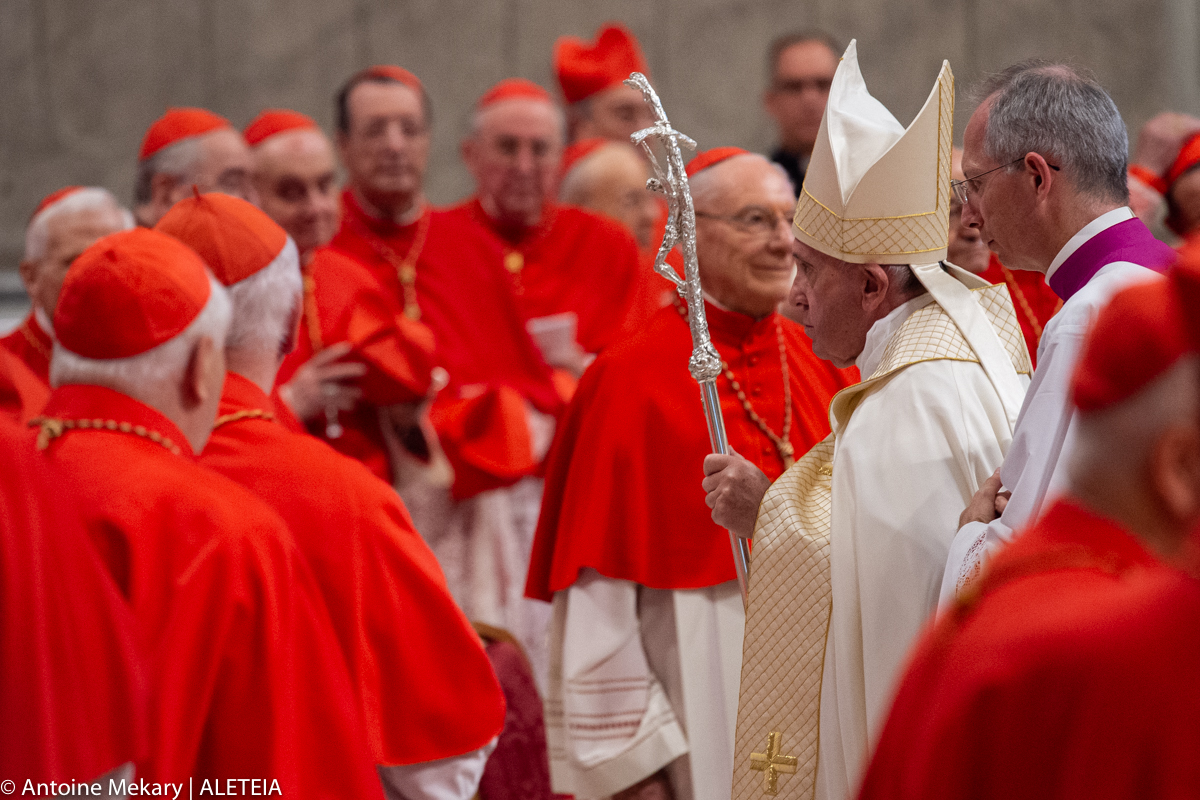 Here is the list of the cardinals, as provided by Vatican News.

Miguel Ángel Ayuso Guixot, MCCI, President of the Pontifical Council of Interreligious Dialogue. A member of the Comboni Missionaries of the Heart of Jesus, Cardinal Guixot has been involved in the dialogue with Islam throughout his priestly ministry. He was involved in the production of the Declaration on Human Fraternity, signed by Pope Francis and the Grand Imam of Al-Azhar in Abu Dhabi in February, 2019.

José Tolentino Calaça de Mendonça, Librarian and Archivist of the Holy Catholic Church. An influential Portuguese author who has published numerous essays, poems, and sermons, he studied theology at the Portuguese Catholic University. In 2018, he was invited by Pope Francis to preach the Lenten retreat for the Roman Curia.

Juan de la Caridad García Rodríguez, Archbishop of San Cristóbal de la Habana (Havana, Cuba). Cardinal García Rodríguez was appointed Archbishop of Camegüey, Cuba, in 1997, where he developed evangelization programs and established prison ministries. From 2006-2010 he served as the President of the Cuban Conference of Catholic Bishops. In 2016, succeeded Cardinal Jaime Lucas Ortega y Alamino as Archbishop of Havana in 2016.

Fridolin Ambongo Besungu, O.F.M. Cap., Archbishop of Kinshasa, Democratic Republic of Congo. Cardinal Besungu made his perpetual profession in the Order of Friars Minor Capuchin in 1987. He studied moral theology at the Alphonsian Academy in Rome. In 2019, after serving in several episcopal posts, he was named Archbishop of Kinshasa, succeeding Cardinal Laurent Monsengwo Pasinya.

Jean-Claude Höllerich, S.J., Archbishop of Luxembourg. Cardinal Höllerich joined the Society of Jesus (Jesuits) in 1981, taking his perpetual vows in 2002 in Tokyo. He was appointed Archbishop of Luxembourg by Pope Benedict XVI in 2011. He has served as President of the Commission of the Bishops’Conferences of the European Union (COMECE) since 2018.

Matteo Zuppi, Archbishop of Bologna. Cardinal Zuppi was named an auxiliary Bishop of Rome by Pope Benedict XVI in 2012. He has worked with the Community of Sant’Egidio, a lay Catholic association dedicated to social service. Pope Francis named him Archbishop of Bologna in 2015.

Cristóbal López Romero, S.D.B., Archbishop of Rabat. Born in Spain, Cardinal López made his solemn profession as a Salesian of Don Bosco in 1974. Much of his ministry has been spent working within the Order in Paraguay. He was named Archbishop of Rabat, Morocco, in 2017 by Pope Francis. Since May 2019, he has also served as Apostolic Administrator of the Archdiocese of Tangier.

Michael Czerny, S.J., Under-Secretary of the Migrants and Refugees Section of the Dicastery for Promoting Integral Human Development. Czerny, of Canadian nationality though born in Czechoslovakia, was ordained a Jesuit priest in 1973. He is known especially for his work in favour of migrants and refugees. He was not yet a Bishop when Pope Francis announced that he would be created a Cardinal; he received episcopal consecration from the Holy Father in a special Mass the day before the Consistory.

In addition to these ten prelates, Pope Francis has also chosen to unite to the College of Cardinals two other Archbishops and one other Bishop, who are distinguished for their service to the Church.

Michael Louis Fitzgerald, M. Afr., titular Archbishop of Nepte. An expert in Christian-Muslim relations, the English prelate has served as President of the Pontifical Council for Interreligious Dialogue, and President of the Commission for Religious Relations with Muslims. At the time of his retirement in 2012, he was papal nuncio to Egypt, and delegate to the Arab League.

Sigitas Tamkevičius: Archbishop emeritus of Kaunas, Lithuania. Born in 1938, Tamkevičius suffered persecution under the communist regime that ruled his country after the Second World War. He was appointed Archbishop of Kaunas by Pope St John Paul II in 1996.

Eugenio Dal Corso, P.S.D.P., Bishop emeritus of Benguela, Angola. Born in Italy, Dal Corso is a member of the Poor Servants of Divine Providence, and worked as a missionary in Argentina and Angola. He was named Bishop of Saurimo, Angola, by Pope St John Paul II. In 2008 he was appointed Bishop of Benguela by Pope Benedict XVI.

Read more:
Why do cardinals put their title in the middle of their name?