How I accidentally taught my kids to practice gratitude 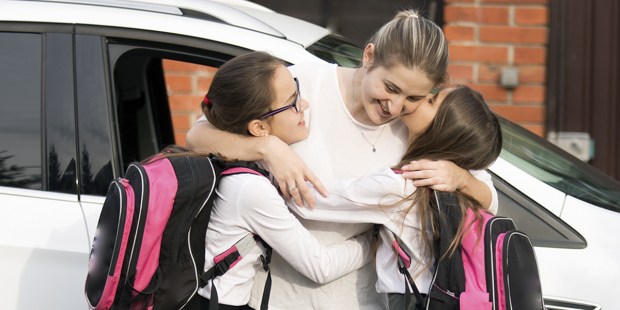 Sometimes parental exhaustion and overwhelm can have unexpected positive results!

My kids and I have developed a ritual when I pick them up from school. They aren’t allowed to say anything negative about their day until they each tell me 3 good things they experienced that day.

It doesn’t have to be a major occurrence — something as simple as seeing a bluebird land on a flower in the garden, or a friend sharing their Oreos. Nor does it have to be something that the rest of us would experience as a “good.” For example, my 10-year-old Charlotte came home a few days ago elated because the boys had to run laps around the field that day, when for two weeks it had been the girls’ turn to run laps. I simply ask them to identify three things that made them feel happy that day.

Hold up, though — before you start to think I’m some kind of parenting sensei, let me explain how this came about …

Like most parents, I’ve been picking my kids up from school since my oldest was in kindergarten. Over the years, my eagerness to see my children, to hear about their days and to share their experiences in whatever small way I could gradually morphed into dread, then resignation. Why? Because my kids never had anything positive to share about their day.

Rather, from the second they got in the car until they were otherwise distracted with snacks, homework, or playing outside, they recited a constant litany of complaints. Every day, it seemed, was terrible. None of them had any friends, their teachers were all spiteful, their lunches were terrible (even when they packed them themselves). It was like they had been waiting all day to get in the car just so they could list all the things they hated about school, life, and the universe.

Y’all, it was exhausting. Even before I worked, I stayed busy at home. I cleaned, cooked, changed diapers, fed babies, corralled toddlers, wrote articles — there’s never been a shortage of work to go around in my adult life. I was often drained by the time I picked them up, and listening to their complaints patiently required every ounce of patience and motherly love I had left.

But once I started working, I ran out of ounces. I went from being drained when I picked them up to being utterly spent. Some days, I had to fight to stay awake in the school pick-up line. Trying to muster up the patience to listen to four tales of woe was impossible, never mind finding the bandwidth to actively seek answers to their many, varying complaints.

It was only when I realized the striking similarity between my kids’ endless complaints and the exhausted, sometimes bitter narrative in my own mind that I understood why my kids did it — they were tired.

Eight hours of school is exhausting and overstimulating. My kids were every bit as drained as I was, and had I myself had a captive audience, I could have launched diatribes 10,000 times longer and more bleak. But one thing I’ve learned in my years of parenting is that “venting” doesn’t actually provide you the emotional release you’re seeking. All it actually does is fan the fires of disappointment, frustration, and resentment.

So I treated my kids the same way I had treated myself for many years — I put a moratorium on complaints until after a threefold greater expression of gratitude. The “three things I’m grateful for” ritual is my internal toll tax before ruminating on a single instance of injustice or rankled feelings. Since I started this many years ago at the encouragement of my therapist, I’ve found that in the process of describing three things I’m grateful for, the complaint waiting in the wings fades away.

The same thing has proven true for my kids. Not only do their resentments and bitterness subside after they think of things they’re grateful for, but I get a clearer picture of which complaints are real complaints. If they come find me later, once snacks and homework are finished, and tell me about something that’s bothering them — then I know it’s something to pay attention to. It’s an inadvertent process of weeding out the trivial to find what matters.

Recently, two solid years after I instituted the practice, my kids have started telling me their “three good things” spontaneously. They’ve gotten into the habit of reaching for three good things to tell me. In the process, I’ve learned infinitely more about their lives, friends, teachers, and even their characters than I would have learned if I had spent these last two years listening to complaints until I couldn’t stand it anymore.

Gratitude is so important for human beings, but it’s not an innate gift. It has to be taught and practiced. And one thing that I’m infinitely grateful for is that in my own exhaustion and impatience, I stumbled into teaching my kids something that will benefit them throughout their lives.