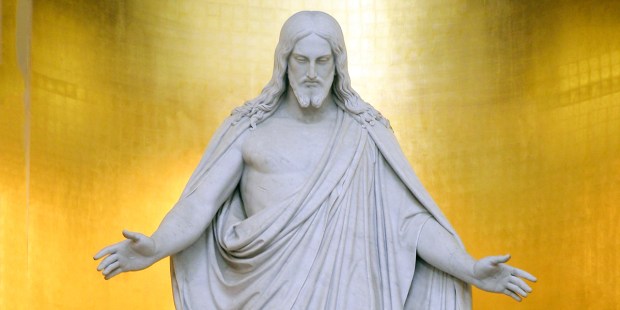 The work of the Danish master sculptor Bertel Thorvaldsen, this statue is one of the peaks of neoclassical art.

Bertel Thorvaldsen might not be too well known outside of Europe. Even more, he might not even be one of the most famous European sculptors. But in his day and age, this Copenhagen-born humble son of a wood carver made a name for himself as one of the 19th-century’s greatest sculptors on the continent, with patrons from all over Europe commissioning works from him.

Having lived for most of his life in Italy (Thorvaldsen was born in 1770 and moved to Rome in 1797, only to return to Copenhagen in 1838), he was considered as the successor of the Italian neoclassical master sculptor Antonio Canova, famously known for his statue of Eros and Psyche, often regarded as the greatest of all the artists of this period. Some of Canova’s sober beauty and warm naturalness can in fact be seen in Thorvaldsen’s Christus Consolator, often referred to simply as Christus.

The Christus, made in Carrara marble, is three and a half meters high (around 11 feet), and represents the Risen Christ with the inscription “Kommer til mig,” that is, “Come to me,” in Danish. According to Fanny Coe’s The World and Its People (a travel book published in 1896), this statue was then considered more than exceptional. Coe’s text reads as follows:

Christ is represented with open arms, saying to the world ‘come to me and I will give you rest.’ It is considered the most perfect statue of Christ in the world. Thorwaldsen (sic) did the whole work himself, not entrusting any portion of it to his pupils, as was his custom. When it was finished, he was seized with despondency. “My genius is decaying,” he said to his friends, “my statue of Christ is the first of my works that I have ever felt satisfied with. Till now my idea has always been far beyond what I could execute; but it is so no longer. I shall never have a great idea again.”

The moment Thorvaldsen finished the sculpture it was moved to the Evangelical Lutheran Church of Our Lady in Copenhagen, where it can still be seen today.