What is the difference between a synod and a council? 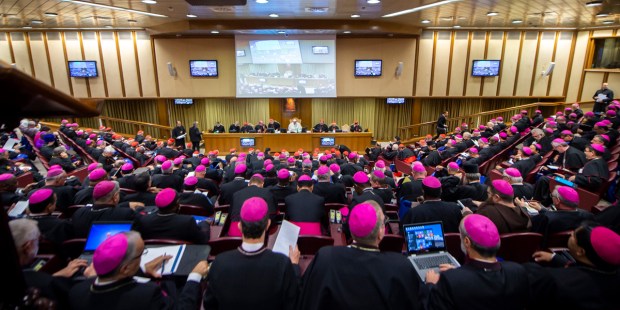 Synods and councils have been part of the Catholic Church since the beginning, but have many differences.

In the Acts of the Apostles, one of the earliest issues the Church had to confront was the admission of Gentile converts into the Christian faith (cf. Acts 15). There were differing views regarding whether converts needed to abide by the law of Moses and be circumcised first in order to become a Christian.

The first bishops of the Church met in Jerusalem to discuss the matter. A final decision was made after much debate and as a result, Gentile converts were no longer required to be circumcised or follow various aspects of the law of Moses.

This meeting of bishops has since been called the “Council of Jerusalem” and was seen as a prototype for all gatherings of bishops where decisions had to be made for the benefit of the Church. The latest of these “councils” was the Second Vatican Council, held in the 1960s.

But over the centuries there have developed two distinct types of these gatherings of Church leaders, one called a council and another called a synod.

According to the Catholic Encyclopedia, “Councils are legally convened assemblies of ecclesiastical dignitaries and theological experts for the purpose of discussing and regulating matters of church doctrine and discipline.”

In particular, “Ecumenical Councils are those to which the bishops, and others entitled to vote, are convoked from the whole world (oikoumene) under the presidency of the pope or his legates, and the decrees of which, having received papal confirmation, bind all Christians.”

There have been roughly 21 ecumenical councils in the history of the Church. These councils are not held regularly and are only convoked when there is a major need.

An example is the First Council of Nicaea (325), where the Nicene Creed was first adopted, clarifying the Church’s belief regarding the nature of Jesus Christ. The Nicene Creed is the one we still pray each Sunday at Mass.

Most recently the Second Vatican Council (1962–1965) was convened to address the modern world and the many new challenges that the Church had to face.

The results of such meetings are binding and are far-reaching, solving issues that benefit the universal Church.

In the history of the Church, synods were normally held locally, within various regions of the world, to deal with local disciplinary issues. Pope Paul VI revived this idea and established the Synod of Bishops in 1965 with the Motu Proprio Apostolica Sollicitudo.

The current Code of Canon Law details the purpose of this smaller group of bishops that meet together to discuss various topics.

The synod of bishops is a group of bishops who have been chosen from different regions of the world and meet together at fixed times to foster closer unity between the Roman Pontiff and bishops, to assist the Roman Pontiff with their counsel in the preservation and growth of faith and morals and in the observance and strengthening of ecclesiastical discipline, and to consider questions pertaining to the activity of the Church in the world.

Furthermore, “It is for the synod of bishops to discuss the questions for consideration and express its wishes but not to resolve them or issue decrees about them unless in certain cases the Roman Pontiff has endowed it with deliberative power, in which case he ratifies the decisions of the synod.”

The bishops may meet together to discuss issues that involve the universal Church, or “considers affairs that directly pertain to a determinate region or regions.”

There were many synodal assemblies held under the reign of St. John Paul II, such as one held in 1994 on “The Consecrated Life and Its Role in the Church and in the World.” Pope Benedict XVI similarly held synods, including one on “The Word of God in the Life and Mission of the Church.”

In each situation the group of bishops discussed particular issues and made suggestions as to how the Church could approach various problems. However, in most cases the solutions were primarily focused on new approaches, rather than binding law.

Read more:
What is the difference between chastity, celibacy, and continence?

Read more:
1st Chinese bishops allowed to be at a synod recount experience