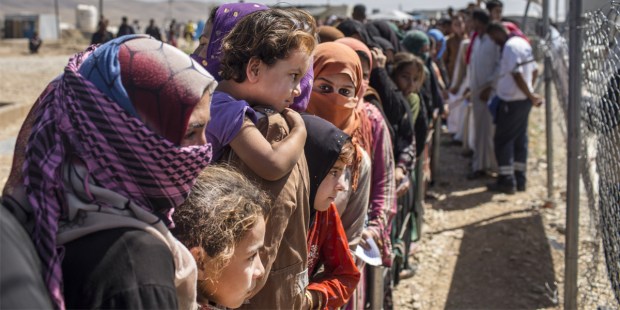 Kurdish and Iranian-backed militias and a resurgent ISIS are just a few of the impediments, witnesses say at USCIRF hearing.

Fears of a resurgent Islamic State, distrust of the Iraqi government, and threats from Iranian-backed and Kurdish militias are making life almost impossible for Christians and other religious minorities to return to their homes, five years after the ISIS invasion.

The U.S. Commission on International Religious Freedom took a measure of rebuilding efforts in Iraq during a hearing in Washington Sept. 26. The independent body wanted to hear from U.S. government officials, representatives from aid agencies and advocates for religious minorities, and determine whether conditions are improving sufficiently to allow minorities to return to their homes and survive in Iraq, and what more the United States and its international partners can do to support them more effectively.

“We recognize that Iraq faces many challenges, including efforts to reestablish stability and security following the territorial defeat of ISIS; to restore and rehabilitate traumatized religious minority communities; to address long-standing Shi’a-Sunni issues; and to resolve tensions between the Kurdistan Regional Government (KRG) and the Iraqi Federal Government (IFG),” said USCIRF chairman Tony Perkins in opening remarks in a room in the Russell Senate Office Building.

USCIRF Vice Chairwoman Nadine Maenza spoke about a recent fact-finding mission she and another commissioner made to the region. “In the Nineveh Plain, the traditional heartland of many of Iraq’s largest religious minorities—or components, as they prefer to be called—some communities have begun the long and fragile process of recovery,” Maenza said. “Christian representatives and NGOs told USCIRF that an estimated 30%-50% of displaced residents have returned to some traditionally Christian towns such as Bartela and Qaraqosh. In those areas, USAID and other international supporters have been making significant efforts to distribute aid, rebuild homes, and help returnees find some semblance of normalcy.”

But, she added, far too many people have not yet felt sufficiently safe to go home. Two threats in particular are giving them pause.

“First, the presence in the Nineveh Plain of the Popular Mobilization Forces, or PMF, represents the clearest and most consistent obstacle,” she said. “Iran-supported militias such as the 30th and 50th Brigades continue to engage in violence and corruption, as well as exacerbate sectarian tensions in key towns of the area. While the Iraqi government has made some attempts to rein in those militias, its ability and potential willingness to do so appears limited at present.”

“They terrorize those families brave enough to have returned, extort local businesses, and openly pledge allegiance to Iran,” Ferguson said. “According to Chaldean representatives, Christian returns to towns like Batanaya and Telkaif have reached only one to two percent because of persecution by these militias. In Bartela, the Christian community is under siege by the 30th Brigade that routinely resorts to anti-Christian rhetoric and puts up placards of Iran’s Supreme Leader Ayatollah Ali Khameni at entrances to the town.”

He also said that an estimated 927,000 people originally from the Nineveh Plain remained displaced as of August 31.

ISIS is also a very real threat, in spite of the fact that the jihadist organization was defeated on the battlefield.

“ISIS remnants, likely numbering in the thousands, fled into hiding but have continued to stage attacks with alarming regularity,” Maenza said. And, Ferguson added, the Kurdistan Workers’ Party (PKK) in Sinjar, the homeland of the Yazidis, conscripts young Yazidi boys into its forces.

“Until the Iraqi Government resolves these security concerns, it will be extremely difficult for members of persecuted minority groups to return home,” Ferguson said.

The USAID official, however, outlined the ways U.S. foreign aid is being used in the region. “Today USAID and the Department of State have contributed a total of $380 million in assistance,” he said. “We have 57 local, 13 faith-based, and 35 international organizations, each contributing in ways appropriate to their size and specialization.”

That includes the Knights of Columbus and Catholic Relief Services, which, he said, recently received an award to work with the Chaldean Catholic Archdiocese of Erbil to provide support to long-term displaced residents from towns in the Nineveh Plains.

In general, Ferguson said, rebuilding requires a “tailored approach that addresses the fullness of needs in a deeply traumatized society—not just rebuilt schools and hospitals, but also psycho-social support to survivors, reconciliation efforts between mistrustful neighbors, and the revitalization of a broken economy.”