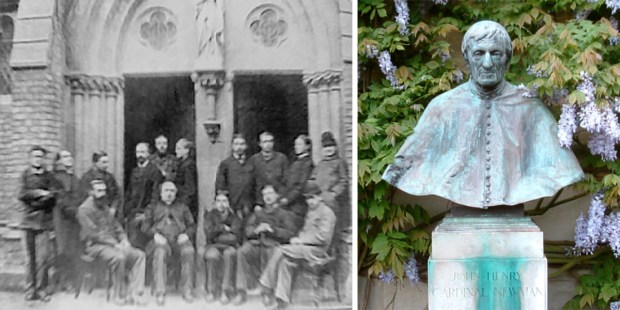 Tolkien, Chesterton, Belloc, and Hopkins were among the many literary giants who were involved with the first Newman Center.

Many are familiar with the Newman Centers that are stationed strategically at thousands of public universities around the globe. They are often associated with a university parish where Catholic students can attend Mass and receive the sacraments while living on campus.

The Newman Center that started it all was born at Oxford in 1888, and was inspired by John Henry Cardinal Newman, who died in 1890 and was well known throughout England for his conversion to the Catholic Church. Newman was a big proponent of Catholic culture and wrote extensively about his ideas regarding education in a volume of lectures entitled The Idea of a University.

With this in mind, Hartwell de la Garde Grissell founded the Newman Society at Oxford with the intention of supporting Catholic students attending the non-Catholic university. Grissell was similarly a convert to Catholicism and was inspired by Newman’s life.

Along with Grissell, Jesuit poet Gerard Manley Hopkins was a founding member of the Newman Society. In the years that followed, nearly all of the Catholic literary giants of the 19th and 20th centuries would be involved with the Newman Society and gave lectures to the Catholic students at Oxford. This would include such prolific writers as J.R.R. Tolkien, Evelyn Waugh, Hilaire Belloc, G. K. Chesterton, and Robert Hugh Benson.

According to the Newman Society’s website, they even were mentioned by Evelyn Waugh in his highly celebrated novel Brideshead Revisted.

In 1945 the Newman was sufficiently established to merit two mentions in Waugh’s “Oxford novel,” Brideshead Revisited. The first reference comes in the course of Lady Marchmain’s comments to Charles Ryder about her son, Sebastian: “I want Sebastian to have all sorts of friends, not just one. Monsignor Bell tells me he never mixes with the other Catholics, never goes to the Newman, very rarely goes to Mass even. Heaven forbid that he should only know Catholics, but he must know some.”

This first Newman Center was a haven for Catholic students, and fostered a unique Catholic culture for many decades during the golden age of Catholic literature in England.

Read more:
One of the best ways to honor St. John Henry Newman is something we all need

Read more:
A pitfall that all converts need to avoid, according to Bl. John Henry Newman