The meaning of bees and beehives in Christian Art 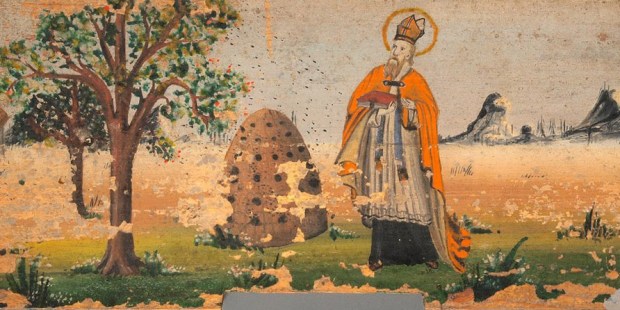 “Because of its industrious habits,” we read in George Ferguson’s classic Signs and Symbols in Christian Art, “the bee has become the symbol of activity, diligence, work, and good order.” Also, some ancient legends claim bees never sleep, and so their image was often used “to represent Christian vigilance and zeal in acquiring virtue,” Ferguson explains.

However, not all the bees we find in Christian art necessarily represent these virtues. There is the case of the Barberini, for instance, a noble Italian Italian family that rose to prominence in the 17th century, and to which Pope Urban VIII belonged. His papal coat of arms includes that of his family, showing three bees surmounted by the papal tiara and the crossed keys of St. Peter. Some of the great monuments in Rome, including the Baldacchino in St. Peter’s Basilica, feature this emblem.

But bees are one thing, and beehives quite another one. Why do we find beehives in Christian art?

It seems St. Ambrose is to blame.

A legend claims that, when he was but a small child, a swarm of bees settled on Ambrose’s face while he was resting in his cradle, leaving behind a drop of honey. His father, the legend continues, understood this to be a sign of his future eloquence and “honeyed” tongue. In fact, Ambrose grew to become a prolific writer and an eloquent preacher.

But there’s a bit more to that: it was Ambrose who compared the church itself to a beehive: “the beehive,” we read in Ferguson’s book, “is similarly the symbol of a pious and unified community.” The Christian, then, is compared to a bee, working for the common good of the hive to which he dedicates his work and life.