The “mystical winepress,” a forgotten motif in Christian art 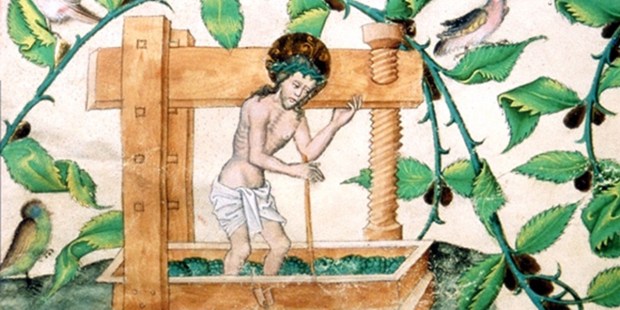 “I have trodden the winepress alone; and of the people there was none with me.”

The Mystical Winepress, also known simply as “Christ in the Winepress,” is a motif that appeared in Christian art in the 12th century, although it is said to be derived from much earlier texts. Some claim it is based in some of Augustine’s interpretations of biblical texts, or in those of some other early theologians and Fathers of the Church, including Gregory the Great.

The image itself is inspired in the opening verses of chapter 63 of the book of the prophet Isaiah:

“I have trodden the winepress alone; and of the people there was none with me: for I will tread them in mine anger, and trample them in my fury; and their blood shall be sprinkled upon my garments, and I will stain all my raiment. For the day of vengeance is in mine heart, and the year of my redeemed is come.”

Isaiah’s passage refers to the wrath of God (“I will tread them in mine anger,” “the day of vengeance is in mine heart”) but, interestingly, it also has an openly messianic overtone (“the year of my redeemed is come”). Here, an interesting twist occurs that allows for the emergence of this iconographic motif: the words of the prophet Isaiah, “I have trodden the winepress alone,” are taken as spoken by Christ himself who, through vicar sacrifice, takes away the sins of the world all on his own. In fact, some other biblical texts might be read in this very same key, thus reinforcing the allegorical meaning of the image. In the Apocalypse, we read:

“And the angel thrust in his sickle into the earth, and gathered the vine of the earth, and cast it into the great winepress of the wrath of God. And the winepress was trodden without the city, and blood came out of the winepress, even unto the horse bridles, by the space of a thousand and six hundred furlongs” (Cf. Rev. 14:9-20)

Also, in Genesis, we find Jacob telling his sons:

“The sceptre will not depart from Judah, nor the ruler’s staff from between his feet, until he to whom it belongs shall come and the obedience of the nations shall be his. He will tether his donkey to a vine, his colt to the choicest branch; he will wash his garments in wine, his robes in the blood of grapes.” (Cf. Gen. 49:10-11).

This “washing his robes in the blood of grapes” has been read, of course, as in an Eucharistic typographical relationship with Jesus’ own blood, Jesus being the True Vine. Gregory the Great, also, saw Jesus as being “the winepress in which he was himself pressed, for with his own strength he patiently overcame suffering.”

The image of the Mystical Winepress, although virtually forgotten now, was indeed quite popular and even remained as part of the iconographic and poetic tradition even in Protestantism, making its way through hymns and poems up until the 19th century.