We lepers owe God more than thanks 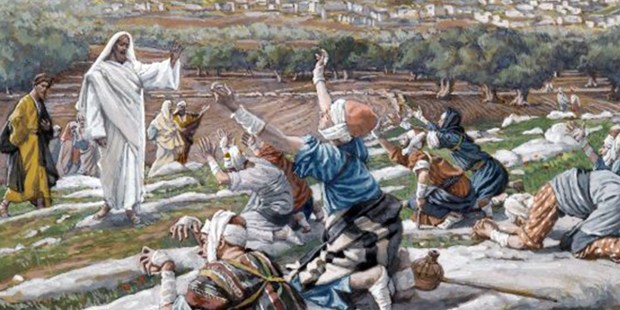 This Sunday we’ll hear about three stages of gratitude. Which one are you in?

When it’s God you are grateful for, gratitude has to mean more than saying “Thank You.”

The readings walk through three stages of gratitude on Sunday, the 28th Sunday in Ordinary Time, Year C.

Exactly 90% of the lepers in the Gospel story fail at the very first stage of gratitude.

In the Gospel, Jesus is on his way to Jerusalem when he is interrupted by 10 lepers. He cures them with a flourish: He tells them to show themselves to the priest. On the way there, they realize they are cured.

One alone — a Samaritan — returns to thank Jesus.

“Ten were cleansed, were they not?” Jesus asks. “Where are the other nine?”

Then he adds, “Stand up and go; your faith has saved you.”

The nine who never returned do what we do so many times: They accept the gift and forget the giver. We embrace a blessing into our lives, but forget who blessed us.

The Samaritan not only thanks Jesus, he recognizes Jesus is God and Jesus says it is his faith that saves him.

Read more:
On Thursdays, Our Family Gives Thanks In All Circumstances

I learned to practice this first stage of gratitude by starting our family prayer with thanksgiving.

After the priest at our wedding told us to pray together every night, my wife and I made a habit of it. But we noticed that, while we were always eager to ask God for things, we rarely thanked him.

So we instituted a rule that we had to thank God for five things before we asked him anything. Now we do the same thing with our children, thanking him at night for everything he has given us that day, from the weather, to the fact that no one is sick, to our friends and food.

But simply saying “Thank You” isn’t enough. Naaman, another “foreigner,” shows the next stage of gratitude.

In the first reading, from Second Kings, after plunging into the Jordan River, Naaman, an important man, is also cured of leprosy.

His cure does for him what it did for the grateful leper: It inspires faith in God. “Now I know that there is no God in all the earth, except in Israel,” he says. Then, he has two mule-loads of earth taken from Israel brought to him, saying, “I will no longer offer holocaust or sacrifice to any other god except to the Lord.”

This is a significant act, showing a real change in identity. He wants to worship the God of Israel, instead of the god of his land, from now on.

This stage of gratitude entails a real change of heart, a conversion of his life. Not only does he thank God once, he plans an ongoing campaign of thanks.

Practice this stage of gratitude by establishing or deepening your own daily prayer life.

God wants to have a relationship with you. He wants friendship. The only way to be friends with someone is to spend time with them. Here’s the way I learned to do it.

Then, comes the last stage of gratitude: St. Paul is what Naaman might look like if he gives his whole life to gratitude.

St. Paul had an experience like Naaman’s when Jesus met him on the road to Damascus and transformed him.

Now, in his old age, he has shown his gratitude with his whole life. Jesus has become the all-encompassing central figure to him.

“Remember Jesus Christ,” he says. “Such is my gospel, for which I am suffering, even to the point of chains, like a criminal.”

How to thank Jesus with you whole life? Father Michael Gaitley has a way.

In his book 33 Days to Merciful Love, Father Gaitley remembers advice from a spiritual director. “The way you live out trust is by praise and thanksgiving, to praise and thank God in all things.”

“Jesus does not demand great actions from us but simply surrender and gratitude,” Father Michael added.

He says to thank and praise God in good times or bad. In good times, because he is blessing you, and in bad, because his will is being done in your life, and that is always for your good. Greet everything with a silent word of thanks.

Paul knows the truth: We Christians have been given more than a cure from leprosy.

In biblical times, leprosy made one “unclean.” But sin is what actually compromises us. It makes us egotistical and uncaring, with our backs to God.

Today, baptism, like Naaman’s dip in the Jordan, restores us to our real beauty, and “showing ourselves to the priest” in confession, restores us with a clean bill of spiritual health.

We have far more to thank God for than the lepers. But Eucharist means thanksgiving, so we can begin a new life of gratitude at Sunday Mass.

Read more:
How I accidentally taught my kids to practice gratitude