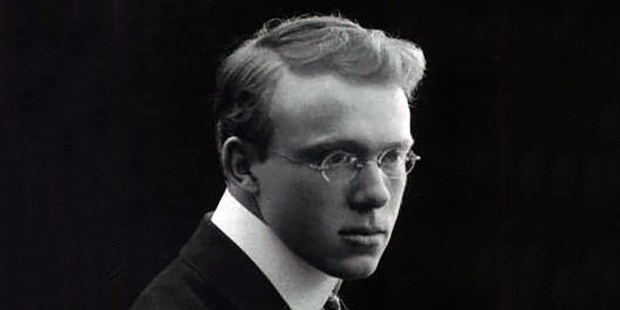 Composer of religious works and operas refused to write the Nazis’ party anthem. He paid for it.

The music of German composer Walter Braunfels was banned by the Nazis as “degenerate art.” Braunfels himself, it’s been reported, came face to face with Adolf Hitler.

According to family lore, Hitler personally came to Braunfels in 1923 and asked him to write an anthem for the National Socialists.

“My father told me the story more than 40 years ago,” the composer’s grandson Stephan Braunfels, told the New York Times:

“Grandfather, who had a temper, was indignant, and threw him out. Afterwards my grandmother declared, ‘That Mephisto will never set foot in my house again’” — Mephisto being the glittering trickster from hell who bargains for the hero’s soul in Goethe’s “Faust.”

Born in Frankfurt-am-Main in 1882, Braunfels was a distant relative (through his mother) of the composer Louis Spohr. Though he studied law and national economy in university, he returned to his first love, music, after being deeply moved during a performance of Wagner’s Tristan und Isolde.

In 1905, he visited the home of the sculptor Adolph von Hildebrand, meeting his youngest daughter Bertel, herself an aspiring composer. The two married in 1909, the same year Braunfels premiered some of his first works: “Symphonic variations about an old French song” and the opera “Prinzessin Brambilla.” The years before the First World War saw more premieres, including “Offenbarung Johannis” (“Revelation of John”) for tenor solo, double choir and large orchestra and “Serenade” for a small orchestra.

Bertel, by the way, was the younger sister of Catholic convert and philosopher Dietrich von Hildebrand, who, perhaps not coincidentally, would end up on Hitler’s enemies list for his outspoken opposition to National Socialism.

Braunfels himself became a Catholic after enlisting in the German army, serving on the front in the First World War and sustaining an injury. “In 1917, reflecting on his experiences in the war and inspired by [composer Anton] Bruckner’s religious devotion as well as that of his father–in–law, Adolph von Hildebrand, Braunfels converted to Catholicism,” says the Orel Foundation, a group that encourages interest in and performance of works by composers suppressed as a result of Nazi policies from 1933 to 1945.

Throughout the 1920s, Braunfels gained notoriety for works such as “Fantastic Appearances of a Theme from Berlioz;” “Die Vögel” (“The Birds”), an opera based on the play by Aristophanes; “Don-Juan-Variations” for a large orchestra; “Don Gil von den grünen Hosen” (“Don Gil of the Green Trousers”); “Prelude and Fugue” for a large orchestra, and the opera “Galathea.”

In 1922, his “Te Deum” was premiered in Cologne. It received almost 100 additional performances, including in Munich and Vienna under conductor Bruno Walter. Writing in Surprised by Beauty: A Listener’s Guide to the Recovery of Modern Music, Jens F. Laurson notes that the work was inspired by Braunfels’ conversion.

Apparently, Hitler did not know that the celebrated composer was half Jewish when he approached him. Braunfels’ grandfather had converted from Judaism to Lutheranism. But that fact would come out after Hitler was snubbed. Braunfels was director of the Hochschule für Musik in Cologne, but in 1933, the year Hitler came to power as chancellor of Germany, he was expelled, for having written what the Third Reich considered to be entartete Musik (degenerate music), as well as for being half–Jewish, the Orel Foundation said. Forced to sell his house, he moved to Bad Godesburg and withdrew from public life as a musician.

But he quietly continued his work, composing an “Advent Cantata” and a cantata-cycle, “The Church Year.” Although Bruno Walter, meeting him in Holland in 1937, accepted his opera “Der Traum ein Leben” (“The Dream One Life”) for performance in Vienna, the Nazi occupation of Austria the following year prevented those plans from materializing.

In 1938, the Reich Music Association banned Braunfels from all public music engagements. Moving to Lake Constance, he soldiered on. Between 1939 and 1941, the first years of the Second World War, he composed an opera on the life of St. Joan of Arc: “Szenen aus dem Leben der heiligen Johanna.” Braunfels wrote the text of the opera based on French and Latin files from the saint’s trial in 1431.

After the war, on October 12, 1945, Braunfels was reinstated as the director of the music school in Cologne. In 1948, his opera “Verkündigung” (“Proclamation”) premiered in Cologne. Based on Paul Claudel’s mystery play L’Announce faith a Marie, it’s a composition Braunfels worked on during his self-exile under the Nazis. He was inspired by “the possibility of creating a musical mystery play which makes visible the knowledge of the greatest possible beauty and eternal order,” according to Laurson.

The Advent Cantata and the “Proclamation” opera “are rooted in Christian themes and texts, and are seemingly an attempt to counter the banality and evil of the Third Reich by adapting a high moral tone,” the Orel Foundation notes.

Sadly, post-war musical elites tended to overlook Romantic composers like Braunfels in favor of the avant-garde, and his works rarely got a hearing. On his 70th birthday, December 19, 1952, the conductor Günter Wand led a performance of his “Berlioz Variations” and “Te Deum” in Cologne. The composer died in Cologne on March 19, 1954.

Braunfels’ music has been enjoying a revival in recent years, however. Manfred Honeck, music director of the Pittsburgh Symphony Orchestra, led the first public performance of the Great Mass since 1927, in Stuttgart in 2010. He also made a recording of it. At the time, a performance for Pope Benedict XVI at the Vatican was under discussion.

“It astonished me that we could still discover such a great composer,” Honeck told the Times. “Since 2001 I’ve done a new Braunfels piece every season. I’m so impressed by the honesty of his music. He never does anything without a purpose. Everything comes from his heart but also shows such an extraordinary intelligence. When people hear it, they love it. The world should absolutely get to know the whole spectrum of his music.”