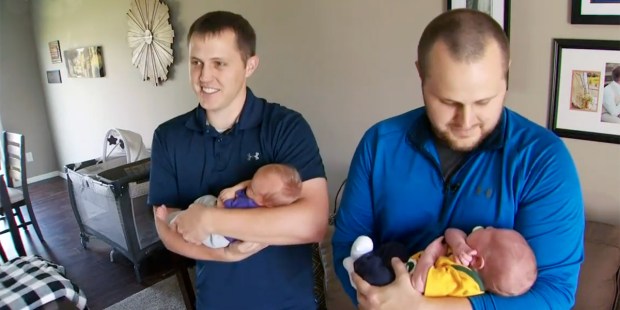 Identical twin brothers Paul and Pat Young from Minnesota had a little surprise on September 19 when both their wives gave birth to baby boys on the same day. Although they were meant to arrive five days apart, the young cousins decided to make their way into the world just six hours apart.

In a heartwarming story that really demonstrates the true miracle of life, Pat and his wife Ashley arrived at Hastings Regina Hospital and the expectant father texted his brother to let him know they were at the hospital. He heard back from his brother to say that he and his wife, Felicia, were at Woodwinds Hospital waiting to welcome their little bundle, too.

The little boys seemed determined to share the same birthday. In fact, at 6:01 p.m. Pat and Ashley met their new son Jack Todd, while Cooper Kenneth, Paul and Felicia’s son, decided to arrive just before midnight on the same day, at 11:49 p.m.

Paul shared with Kare: “I always kind of thought, or knew, it was a possibility but I didn’t expect it to happen.”

Well, it seems God had big plans for the family. The brothers, who are both members of the police service, will now have the joy of celebrating their children’s birthdays together as they grow up.

Read more:
26-year-old twins ordained to the priesthood side by side on the same day

Read more:
Identical twins give birth within hours of each other