Loose, flowing hair is a symbol of penitence in Christian art 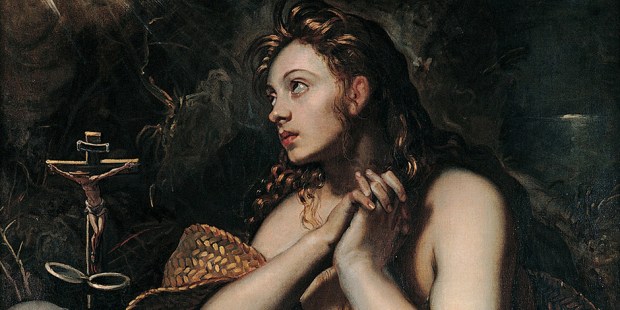 “She began to wash his feet with tears, and did wipe them with the hairs of her head.”

In the Hebrew bible, a Nazirite is he who voluntarily makes a special vow of consecration to God. What this vow entails is explained in detail in chapter six of the Book of Numbers, verses 1 to 21:

“And the Lord said to Moses, ‘Say to the people of Israel, when either a man or a woman makes a special vow, the vow of a Nazirite, to separate himself to the Lord, he shall separate himself from wine and strong drink (…) All the days of his separation he shall eat nothing that is produced by the grapevine, not even the seeds or the skins. All the days of his vow of separation no razor shall come upon his head; until the time is completed for which he separates himself to the Lord, he shall be holy; he shall let the locks of hair of his head grow long.’”

Samson (Judges 13:5) and Samuel (1 Samuel 1:11) are both Nazirites. Both being born of previously barren mothers, they became Nazirites not on their own volition but after their respective mothers’ vows, requiring them (Samson and Samuel, that is) to live devout, consecrated lives, which made them suitable of receiving great gifts: Samson received exceptional physical strength, which allowed him to defeat the Philistines in battle, while Samuel became a prophet.

Read more:
A quick look at the biblical story of Samson, in memes

These vows imply a certain degree of self-imposed discipline, including that of not cutting one’s hair, as is clearly stipulated in the Book of Numbers. This might be one of the antecedents of a motif we commonly find in Christian art: penitents are always depicted with long, flowing, loose hair.

“And a woman in the city, who was a sinner, having learned that he was eating in the Pharisee’s house, brought an alabaster jar of ointment. She stood behind him at his feet, weeping, and began to bathe his feet with her tears and to dry them with her hair.”

This passage of the Gospel, and the Jewish tradition of the Nazirite vow, apparently led to the custom of the hermits (and some other penitents) of letting their hair grow long. According to some sources (included George Ferguson’s classic Signs and Symbols in Christian Art), “in ancient times, unmarried women wore their hair loose and long.” Ferguson goes as far as to affirm this is the reason most virgin saints are frequently portrayed with long, flowing hair, and long hair worn by men alludes to Samson, the Nazirite.