The dog who waits for grace before meals 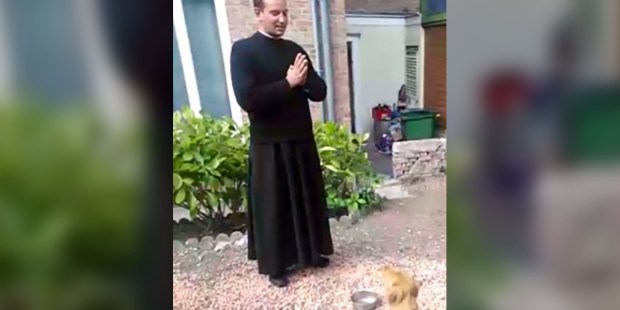 A recently adopted puppy named Pastis is taking to parish life quite well.

“Benedicite … Amen!” This charming video is particularly timely since we recently celebrated the feast of St. Francis of Assisi. Fr. Cédric Lafontaine, a priest of the Community of Saint Martin currently serving the diocese of Amiens, France, recently adopted a young copper-colored Nova Scotia retriever, named Pastis, which has already acquired some basic training … like waiting for the end of grace before rushing in to eat his bowl of food.

According to his priest-trainer, who joins his hands and chants the prayer before meals (in Latin, for the win), the puppy’s catechism classes have started well. When we see the dog’s attitude, full of wisdom and reserve, we have no doubt it’s true. St. Francis isn’t the only one who knows how to talk to animals.

Posted about a month ago, the video has garnered more than 16,000 views. If only we could ensure that our family members would exercise such self-control!