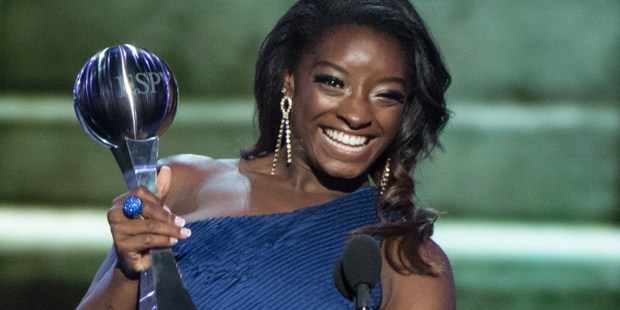 The 22-year old gymnast, who broke the world record for medals earned on Sunday, has been open about the role her faith has played in her life.

Simone Biles made history Sunday by breaking the world record for medals earned by a gymnast. In winning the 24th medal of her career, a gold on the balance beam, the 22-year-old Biles surpassed Belarusian Vitaly Scherbo’s record of 23 medals, which he has held since 1996.

Biles earned five Olympic medals, four of them gold, at the 2016 Games in Rio de Janeiro. Not one to rest on her laurels, after her triumph at the Rio Games, Biles expanded her repertoire to include two new technically difficult, original skills that are now known in the official Code of Points as the “Biles dismount on beam” and the “Biles II on floor.”

Her record-earning performance at the gymnastics world championship cements her reputation as one of the greatest athletes in the history of the sport.

Her path to success hasn’t been without obstacles, and it has been her Catholic faith that has helped her surmount them.

Born in Ohio to a mother who battled drug and alcohol abuse, Biles was raised by her grandparents, who adopted her and her younger sister. Reared in the Catholic faith, Biles attends Sunday Mass with her adoptive parents, and has been open about her faith.

During the Olympic games in Rio, Biles revealed to Us magazine the contents of her gymnastics bag when a reporter noticed a white rosary that fell out. Biles explained, “My mom, Nellie, got me a rosary at church. I don’t use it to pray before a competition. I’ll just pray normally to myself, but I have it there in case.”

In her 2016 autobiography Courage to Soar, Biles wrote about the training and sacrifices she made to make it to the top of her sport, and how her Catholic faith helped take her there.

Describing the day she received the sacrament of Confirmation, Biles wrote:

“I marched into St. James the Apostle Church that Sunday in a line of teenagers with solemn faces… in a way, our procession reminded me of a medal ceremony, except that no gold, silver, and bronze medals would be given out. Instead, our prize would be something much more powerful: in a few moments, each of us would bow our heads to receive the Holy Sacrament of Confirmation.”

In an interview with the Houston Chronicle, Biles explained why she has been so open about her Catholicism.

“Kids today talk about faith, and I think it’s OK for me to share my faith so kids can see how it helps you through the whole process.”