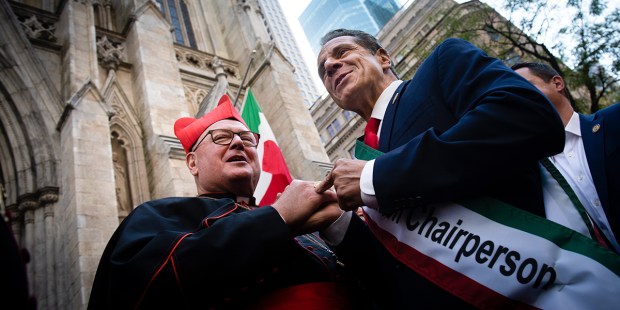 Now the two, both Italian-Americans who have family ties to Catholicism, are taking sharply differing positions over a statue of an Italian-American saint, Mother Frances Xavier Cabrini.

Mayor Bill de Blasio decided not to honor Mother Cabrini with a statue in New York City, despite the fact that the 19th-century Italian immigrant and advocate for immigrants received the most nominations in the “She Built NYC” competition, which aims to build more statues honoring women.

Catholics in New York have been vocally upset over the snubbing of a saint who worked hard in New York and Chicago. Her relics are venerated in a shrine in upper Manhattan.

At Monday’s Columbus Day Parade in Manhattan, Gov. Andrew Cuomo announced that the state would get behind an effort to give Mother Cabrini a statue, if the city wouldn’t.

For Cuomo, perhaps it was an effort to mend fences with at least part of the Catholic community, which strongly opposed his efforts in recent years to expand abortion rights in the state.

CBS said the governor will appoint a commission to determine a location for the statue and choose an artist. The Diocese of Brooklyn has raised about $30,000 to build it. The state will fund the rest.

“With that announcement, the governor undermined the mayor and did so to the applause of the Italian-American community,” CBS noted.

The Columbus Day Parade on Fifth Avenue had a float from the Diocese of Brooklyn, which featured a statue of St. Cabrini. Bishop Nicholas DiMarzio of Brooklyn explained that the reason for the advocacy for a statue was to help put the cause of immigrants at the forefront.

“I welcome the assistance the Governor is promising in erecting a statue for Mother Cabrini, which we hope is a monument to her for her work on behalf of immigrants,” the bishop said in a statement. “We will work with Governor Cuomo’s office to make it happen.”

Earlier, Bishop DiMarzio said that Mother Cabrini was “certainly one of the women who built New York City.”

“Her work to establish orphanages, schools, and a hospital, along with her commitment to immigrants, absolutely should be recognized. The failure to honor Mother Cabrini with a public statue would be an affront to many New Yorkers, especially Italian-Americans, who see her as most deserving,” he said.

The Cabrini statue controversy was not the first time de Blasio ruffled Italian-American feathers. Last year, the mayor, who recently dropped out of the presidential contest, was reportedly considering removing the Christopher Columbus statue in Columbus Circle in Manhattan.

Cuomo also brought that up on Monday.

De Blasio has said that Mother Cabrini could be in the running for the next batch of statues to be considered.