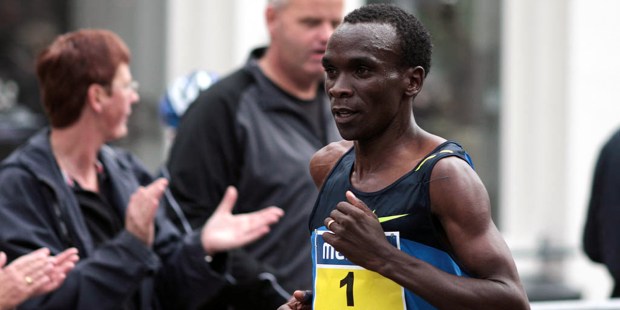 “I am the happiest man to run under two hours to inspire many people; to tell people that no human is limited, you can do it,” Kenya’s Kipchoge said.

After Kenya’s Eliud Kipchoge became the first marathoner to finish the race in less than two hours, the people who know him best attributed his success to his Catholic upbringing and the prayers of his family, friends and clergy, according to a report in ACI Africa.

“The entire family is Catholic and from the family, it [Kipchoge’s victory] was a moment of joy and jubilation, with a summary of: God fulfills His promise,” Kipchoge’s cousin, Fr. Kennedy Kipchumba told ACI Africa.

“I was part of the close to 3,000 people who were following the race from a big screen and with all of them, we ended up bowing to God to thank him for this much he offered to us,” Fr. Kipchumba said.

Kipchoge’s mother, Janet Rotich, who Fr. Kipchumba said is “the main person in the family,” was quoted as saying, “I wake up at 3 a.m. every day to pray for Kipchoge. I pray the Rosary,” according to the ACI Africa report.

In spite of this impressive achievement, Kipchoge, an eight-time major marathon winner and three-time Olympic medalist, will not go down in the history books as having officially broken a world record, as the race was not run under proper conditions and included professional pacesetters.

After winning the race, Kipchoge, who worships at St. Paul’s University Catholic Church in Nairobi, said he hoped his success would inspire others.

To read the testimony of Kipchoge’s countrymen, who believed his victory was a result of answered prayers, see ACI Africa’s entire report.