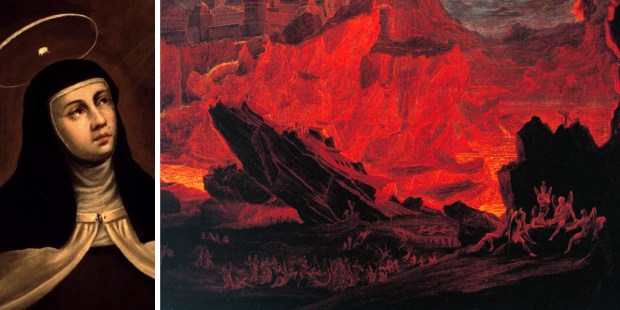 The vision reminded her of the mercy of God and how he spared her this horrendous fate.

While St. Teresa of Avila is known to have experienced some of the most ecstatic experiences of God’s presence ever recorded, she also received visions of the opposite.

Teresa writes in her autobiography about a frightening vision she had of Hell and how it haunted her the rest of her life. When writing the vision down she experienced the same bone-chilling feelings run throughout her body.

I found myself, as I thought, plunged right into Hell. I realized that it was the Lord’s will that I should see the place which the devils had prepared for me there and which I had merited for my sins. This happened in the briefest space of time, but, even if I were to live for many years, I believe it would be impossible for me to forget it. The entrance, I thought, resembled a very long, narrow passage, like a furnace, very low, dark and closely confined; the ground seemed to be full of water which looked like filthy, evil-smelling mud, and in it were many wicked-looking reptiles. At the end there was a hollow place scooped out of a wall, like a cupboard, and it was here that I found myself in close confinement. But the sight of all this was pleasant by comparison with what I felt there … My feelings, I think, could not possibly be exaggerated, nor can anyone understand them. I felt a fire within my soul the nature of which I am utterly incapable of describing … I had been put in this place which looked like a hole in the wall, and those very walls, so terrible to the sight, bore down upon me and completely stifled me. There was no light and everything was in the blackest darkness.

It was a terrifying experience, but she fully understood why God allowed her to see first-hand the torments of Hell.

[T]his vision was one of the most signal favors which the Lord has bestowed upon me: it has been of the greatest benefit to me, both in taking from me all fear of the tribulations and disappointments of this life and also in strengthening me to suffer them and to give thanks to the Lord, Who, as I now believe, has delivered me from such terrible and never-ending torments.

She understood that if she hadn’t turned away from vice and embrace a life of virtue, this would have been her fate. Teresa was grateful to God for the many graces she received and for his mercy in sparing her such torment.

Furthermore, this vision moved St. Teresa to experience great sadness over those people who were drawing near to that destination, through their deliberate choices.

It also inspired me with fervent impulses for the good of souls: for I really believe that, to deliver a single one of them from such dreadful tortures, I would willingly die many deaths. After all, if we see anyone on earth who is especially dear to us suffering great trial or pain, our very nature seems to move us to compassion, and if his sufferings are severe they oppress us too.

Instead of experiencing satisfaction at the justice of those souls being eternally damned, she wanted to save them, offering herself as a living sacrifice.

Hell is a very real place, and while it shouldn’t be our only reason for choosing virtue over vice, it is a good starting point and should lead us to a life united to God. Our choices matter, and the good news is that we can change our lives, no matter how far we have gone down the wrong path.

Read more:
The justice and yes, the mercy of Hell