The curious place of apes in Christian art 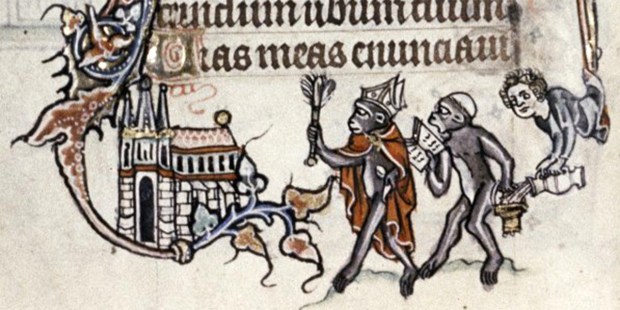 In Christian art, the figure of the ape has often been used to symbolize sin, malice, cunning, and lust. Considering the inhabitants of Europe were already familiar with the behavior of the most common apes in the Mediterranean basin (the particularly mischievous Gibraltar Barbary macaques, and the fierce Egyptian baboons), it is only natural these would become the main references for artists including these creatures in their works.

In her work on apes in Medieval Art, Monica Ann Walder explains apes appear mostly on the margins of medieval manuscripts, but they can also be seen in columns and portals. As a general rule, apes appear “parodying the actions of human beings, showing tricks learned from the minstrels, as part of the visual representation of a fable or moralizing text, or fighting birds.” Exceptionally, apes are depicted as winged beings, even demonic ones, as belonging to the choir of devils often seen tempting or tormenting ascetic saints. In fact, in the Puerta De Las Platerías in the Compostela Cathedral, the devil is represented as a winged ape tempting Christ in the desert. By extension, the images of chained monkeys ended up being associated with the souls of the damned in hell, Walder explains.

Read more:
What do the animals represent in “Christ in the Wilderness”?

However, chained apes can also symbolize sin being conquered by faith and virtue. It all depends on the context: associated with evil, malice, and vice, the ape was also seen as symbolizing “the slothful soul of man,” Ferguson explains in his classic Signs and Symbols in Christian Art. An ape in chains, then, can be seen as an allegorical representation of the virtue of temperance, providing balance in the use of created goods. In fact, Aquinas refers to temperance as “a disposition of the mind which binds the passions.” Such binding seems to be more than adequately represented by the image of the chained ape.