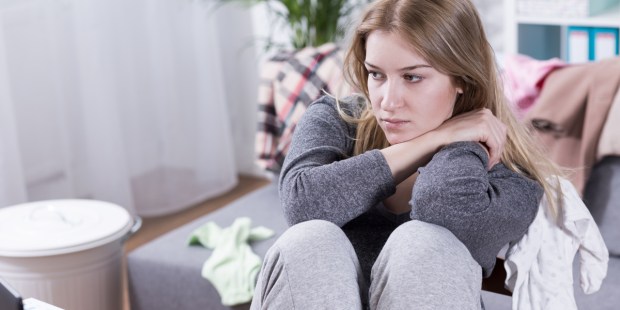 Sometimes we have to mother ourselves, just like we would for one of our kids.

This morning, my son wanted me to go to chapel at his school. They have it every Wednesday, and today he and a few boys from his class were going to be singing.

“Singing?” I asked, confused, as I tried to strap his little brother into the carseat. “But you’re in strings, not choir.” His response was lost in the increasingly fraught battle I was fighting with the seatbelts, but I thought I had caught the gist of it. I thought it was a one-off thing, sort of a goofy little class skit or something.

“I’m sorry, buddy,” I said, throwing my bag in the front seat and twisting the keys in the ignition. “I can’t make it this morning, but I’ll be there when you do your strings performance.”

His face fell, and I felt awful. But I also knew there were some real obstacles to getting there, like the fact that I wouldn’t have time to shower or change and it would be frowned upon to go to chapel in leggings and a t-shirt with my hair in a messy bun. I also knew it would take the first hour of my day, an hour in which I had exactly one hour’s worth of work to get done so the rest of my day would go smoothly. So even though I felt the creeping mom guilt, I held firm in my decision. I apologized again, gave him a hug, and we swung out of the driveway to take everyone to school.

Thirty minutes ago, my phone chimed. I was feeling pretty good, having accomplished exactly what I needed to accomplish in that hour and preparing to move on to the next thing. I glanced down and saw a video from the mom of one of my son’s classmates. There was my son, on stage in chapel, saying the prayer for the whole school.

This is a big deal. They don’t ask kids to say the prayer very often — it’s an honor, and conveys a sense of respect upon the student. And there was my son, who had asked me to come to chapel, saying the prayer. While I was at home.

Y’all. The mom-guilt crushed me. I watched that video over and over, seeing his eyes scan the audience, knowing he was looking for me even though I told him I wouldn’t be there, and I felt myself falling into an absolute pit of self-laceration. It’s not an exaggeration to say that in that moment, I hated myself.

Rationally, I know I’m not a terrible mom. I know that I made what I thought was the right decision at the time. I also know that I should have slowed down, listened more carefully, and tried to make sure I fully understood what my son was asking. But the temptation to let myself be dragged down into an abyss of guilt, misery, and despair over having made this mistake was powerful. So powerful that I could basically see it play out in my day.

I could go upstairs, let the tears building up in my eyes flow, cry until I was too dehydrated to cry anymore, and then fall into an exhausted, miserable sleep. I could abandon the work I had to do today and feel miserable instead, thereby proving to myself that I am indeed a failure at all things, not just motherhood.

Or, I could take a deep breath and go for a walk. I could let myself feel sad that I missed this, and then ask myself what I can do differently next time. I could treat myself the way I treat my kids when they feel like utter failures, and insist that I separate my actions from my self-worth. I could be gentle, kind, and motherly to myself.

It sounds weird, I know, but it’s actually a technique I learned in therapy — to apply the best lessons I’ve learned about how to be a good mom to myself, as well as my kids. Let me tell you, it’s about a thousand times harder to be kind and gentle with myself than it is with my kids. But it’s also necessary.

Mom guilt is a strong and powerful force in our lives as mothers. And it’s not always a bad thing — sometimes we need to feel that guilt in order to see a way in which we can change and be better. But if we let the guilt pull us into despair, we’re not going to learn anything. So it’s important, in times of guilt, to be gentle with ourselves and to remember that we’re every bit as worth of kindness and compassion as our kids. We can only change if we give ourselves the grace to be human, make mistakes, and learn to correct them.

Read more:
10 Beautiful quotes on motherhood from ‘The Eternal Woman’