Pope Francis: Are you letting God be creative? 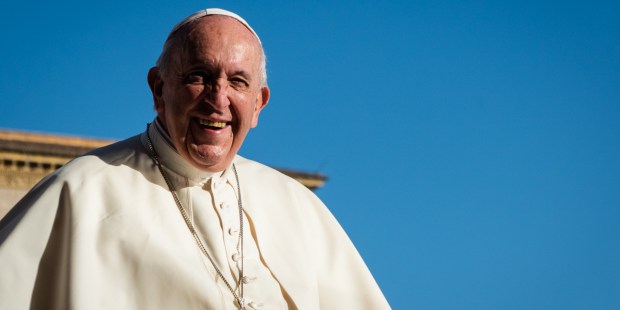 Pope Francis is continuing his general audience series on the Acts of the Apostles, today looking at a “divine provocation” that happened in the life of the first pope, St. Peter.

Francis spoke about the event in Acts 10, when Peter receives a dream of a blanket-like cloth descending from heaven with animals that were not permitted to eat, according to Jewish law.

The vision, the pope said, “acts as a divine ‘provocation,’ to provoke a change of mentality in [Peter].”

The vision reflects the “journey of the Gospel in the world,” Francis suggested, which is a journey “accompanied by the supreme creativity of God Who manifests Himself in a surprising way.”

The Lord wants Peter no longer to evaluate events and people according to the categories of the pure and the impure, but to learn to go beyond, to look at the person and the intentions of his heart. What makes man impure, in fact, does not come from outside but only from within, from the heart (cf. Mk 7: 21). Jesus said this clearly.

So after this vision, Peter goes into the house of the pagan Cornelius, and preaches Christ, baptizing the household.

God’s aim is to make his children open to the universality of salvation, “because God wants to save everyone,” the pope asserted.

And for this, he calls the baptized to “open themselves up to others” and live together in a way that “transforms every interpersonal relationship into an experience of fraternity.” It’s a process of “fraternization” that the Spirit wants to trigger in history, the Holy Father said.

Thus, Peter learns with the vision of the “impure” creatures that he cannot put up roadblocks for God’s salvation.

From the Prince of the Apostles we learn that an evangelizer cannot be an impediment to the creative work of God, who “wants all men to be saved” (1 Tim 2: 4), but one that fosters the encounter of hearts with the Lord. And how do we behave with our brothers and sisters, especially with those who are not Christians? Are we impediments to the encounter with God? Do we hinder or facilitate their encounter with the Father?

Pope Francis concluded with a prayer that we might “allow ourselves to be astonished by God’s surprises, not to hinder His creativity, but to recognize and encourage the ever new ways in which the Risen One pours out His Spirit into the world and attracts hearts, making Himself known as the ‘Lord of all’ (Acts 10: 36).”

Read more:
Pope: Yes, Jesus is merciful, but He is also just