The meaning of rocks in Christian art 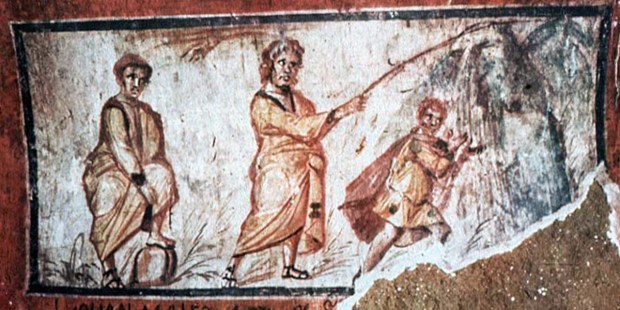 In chapter 16 of the Gospel of Matthew we find the passage often referred to as “Peter’s Confession of Christ.” The text, which goes from verse 13 to verse 20, reads as follows:

Now when Jesus came into the district of Caesarea Philippi, he asked his disciples, “Who do people say that the Son of Man is?” And they said, “Some say John the Baptist, but others Elijah, and still others Jeremiah or one of the prophets.” He said to them, “But who do you say that I am?” Simon Peter answered, “You are the Messiah, the Son of the living God.” And Jesus answered him, “Blessed are you, Simon son of Jonah! For flesh and blood has not revealed this to you, but my Father in heaven. And I tell you, you are Peter, and on this rock, I will build my church, and the gates of Hades will not prevail against it. I will give you the keys of the kingdom of heaven, and whatever you bind on earth will be bound in heaven, and whatever you loose on earth will be loosed in heaven.” Then he sternly ordered the disciples not to tell anyone that he was the Messiah.

In this passage, it is clear Jesus is not referring to himself as being the rock, but to Peter. In Aramaic, one of the languages Jesus spoke, the word for rock is “Kepa,” and was transliterated in the Greek texts of the New Testament as “Cephas” (as can be seen in plenty of passages in Paul’s letters: Galatians 2:7-14, 1 Cor. 1:11-13, 1 Cor. 3:21, 1 Cor. 9:5 and 1 Cor. 15:5) but also translated directed into the Greek, “Petros,” from where we get “Peter.” In that sense, Peter is indeed the rock on which the church is founded, as the vicar of Christ, an office passed on from pope to pope from the days in which Peter was himself the bishop of Rome.

However, when rocks appear in Christian art they do not necessarily refer to Peter but, not surprisingly, to Jesus himself.

Christian theology saw in a passage from the book of Numbers a typological prefiguration of the water that flowed from Jesus’ side when pierced while still on the cross (Cf. Jn 19:34: “one of the soldiers pierced his side with a spear, and at once blood and water came out”). The passage from Numbers reads:

So Moses took the staff from the Lord’s presence, just as he commanded him. He and Aaron gathered the assembly together in front of the rock and Moses said to them, “Listen, you rebels, must we bring you water out of this rock?” Then Moses raised his arm and struck the rock twice with his staff. Water gushed out, and the community and their livestock drank.

Jesus is then often referred to as the rock from which the pure waters of salvation flow. But also, a rock is clearly a symbol of firmness, defense, fidelity, and refuge. This image is quite clear in Psalm 18 (“The Lord is my rock, my fortress, and my deliverer, my God, my rock in whom I take refuge”) but also in the gospel of Matthew (Cf. Mt 7, 24):

“Therefore everyone who hears these words of mine and puts them into practice is like a wise man who built his house on the rock. The rain came down, the streams rose, and the winds blew and beat against that house; yet it did not fall, because it had its foundation on the rock”

So, depending on the context, rocks in Christian art can refer to either Peter or Jesus himself.