The monastic roots of Irish whiskey 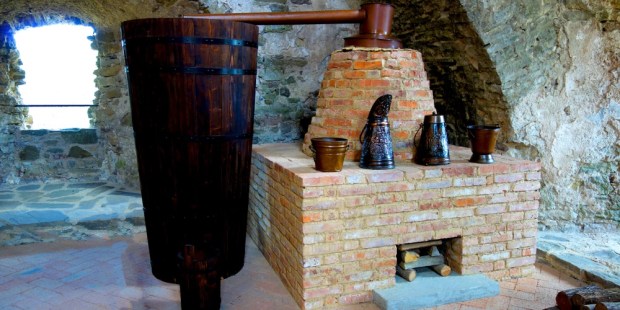 The Irish, however, didn’t always have a nice spot of whiskey to keep the chill off their bones in the winter months. Although the precise date is unknown, scholars generally accept that it was brought to Ireland by Christian monks, between the 8th and 11th centuries. These monks would make long pilgrimages from their Celtic lands to the Mediterranean region, and somewhere along the way they learned the art of distilling.

These traveling monks’ spirit of choice would have most likely have been wine, which they would have learned to make from their time in the Middle East. This worked well for the warm regions of the Mediterranean, but in the north where it’s cold they had to find another method for creating spirits.

Men’s Journal suggests that this method may have been discovered by Ramon Llull, who was a simple musician until a series of visions of Christ led him to become a monk. Llull was a pre-Renaissance example of a Renaissance man; a polyglot and polymath, he was an inventor and consummate scholar who was very interested in alchemy, by which process he may have been one of the first to discover distillation.

Llull’s discovery would allow the creation of beverages with higher concentrations of alcohol, and although he was based in Spain, it is not unreasonable to suppose that this new process was shared with monks of other orders, who each developed it to further their own interests. In countries like France, Germany, and Belgium, this information was used to the betterment of beer, but in the north, Ireland and Scotland used it to perfect their whiskies.

As the Celtic monks wrote in Latin, the drink became known as “Aqua Vitae” or “water of life.” There was little distinction, in those days, between things that were healthy for the body and things that made the body feel good, so it was thought to be beneficial towards one’s health to drink Aqua Vitae. However, in the Celtic tongue, it was called uisge beatha, from which the word whiskey is derived.

Monastic distilled Irish whiskey took Europe by storm and became one of the most popular drinks until King Henry VIII disbanded all the religious communities. Some of the former monks would go on to support themselves in secular life by starting their own distilleries, using the skills they had learned in the monastery.

There is another theory that is circling around that dates the creation of whiskey to pre-Christian times. We could not find any concrete evidence that it is true, but it is an entertaining story posed by Barry Walsh of Whiskey Magazine. The tale revolves around a supposed ancient piece of writing discovered on tanned reindeer skins, which Walsh says were discovered near the Irish River Liffey.

The scribblings are by a man named Pah-Dee, who was apparently a wise man, inventor, and scribe. The writing was similar to a journal entry and the tale opens with Pah-Dee presenting the village chief with what is described as two wheels joined by an axle. As the chief finds no use for this important invention, Pah-Dee throws it on the fire.

The story then mentions Pah-Dee’s first attempt at distillation, which he describes:

“Resumed heating the murky bubbly mixture of grain and water, and collected a fiery liquid through worm and reed pipe. Tastes bad. Made me dizzy and sick and I had to lie down.”

Pah-Dee tries again and makes a somewhat better tasting concoction that is still not received well, but thankfully it caused the people who tested it to fall asleep before they could kill Pah-Dee for serving them a less than palatable beverage. The story then breaks as they are almost comically invaded by Scottish forces, described as:

These invaders steal all of Pah-Dee’s possessions, but they leave him alive and the man starts over from scratch, when he began to run his “fire-water” through the distillery three times, discovering triple-distilled alcohol. The story ends with people enjoying Pah-Dee’s new beverage, however they did not like his new invention for cutting up bread into thin slices, so he threw it in the river.

The tale could be nothing but Irish blarney, but whenever good whiskey is discussed, entertaining stories are sure to follow.