A saint from Fatima’s neighboring town: St. Irene was a victim of sexual abuse 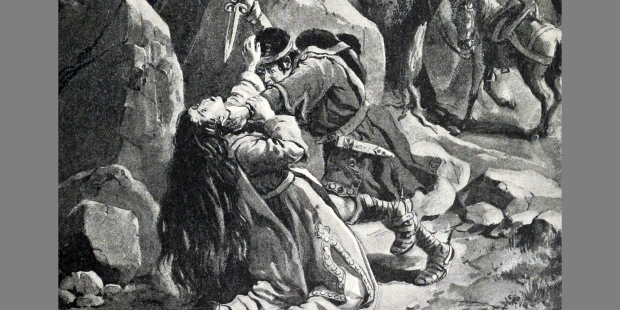 St. Irene was assaulted by her tutor and killed by the hired man of a rejected suitor.

During October, when we focus on Fatima, the Miracle of the Sun, and the Holy Rosary, we might take a look at the story of a revered saint from Fatima’s neighboring town, Tomar. Her name is St. Irene of Tomar, and she was martyred in 653.

It’s natural that many of the stories and accounts of the early saints have facts intermingled with legend.

Legend says that Irene was born in a place called Nabancia, which is known today as Tomar, located in Portugal. Irene was born into an affluent and influential family. Her parents secured a private tutor for Irene and sent her to a  convent school.

Apparently, Irene was quite beautiful, and the few men who actually got a chance to see her were always enamored by her beauty. There was one such man in the area named Britald. He began to watch for her to leave for church and then follow her.

The man became obsessed and finally approached Irene and asked her to marry him. She refused  Britald, telling him she had taken a vow of celibacy and had given herself to God as a nun. The man was crushed and walked away.

However, there was another man who had hidden designs on Irene. It was her tutor, Remigio. He was a monk entrusted by Irene’s parents not only to teach their daughter but to guard her also. As time went by, Remigio grew in lust, and one day shocked Irene by making unreasonable and impure advances towards her. She turned him away as forcefully as she could, but Remigio would not merely go away. Instead, he became furious, quit as her tutor, and plotted revenge.

Soon after,  people began asking Remigio why he was no longer tutoring Irene. He started telling people that he had found out she was pregnant and that there was no way he would have anything to do with her. He sent a message to Irene, asking if he could meet with her for a few moments to give her some material to study.

As the rumors of her pregnancy continued to spread, Irene agreed to meet with Remigio. He managed to offer her a drink, and she accepted. The legend accounts that Remigio had concocted a poison that would make her abdomen swell. When people saw Irene with her swollen belly, they believed Remigio’s lie. Word got back to Irene’s first rejected suitor, Britald. He was absolutely livid that Irene had lied to him and had been promiscuous. He was not about to let this behavior stand.

Britald hired a mercenary to kill Irene. Shortly after Britald’s “arrangement” had been made, Irene was walking home from afternoon prayer when the assassin struck. He sneaked up from behind her and cut her throat. He dragged her lifeless body to the Tagus River and threw it in. Folks no longer seeing Irene either going to Mass or praying in church thought that she had left the city in shame. What else could have possibly happened to her?

But here the legend turns to Irene’s uncle, the abbot Celius, who had received a mystic revelation about the truth of Irene’s death and the location of her body. Her uncle gathered a procession of people and made a journey to the place where he knew her body would be found.  The water’s currents had carried Irene’s body to the shores of Scalabis (which is known today as Santarem, which means St. Irene).

When the procession reached the site, the waters receded, and the intact remains of Irene were found. It was also noted that she was not pregnant and that she had been a victim of lies and slander. The monks gave her a formal burial, and the story of St. Irene (Santa Iria) began to spread. The Cova da Iria, where Our Lady appeared to the children of Fatima, was named for her.

Today, St. Irene of Tomar is honored as a saint and martyr throughout Portugal and in the Catholic Church. She is the patron saint of Tomar and Santarem, and her feast day is October 20.