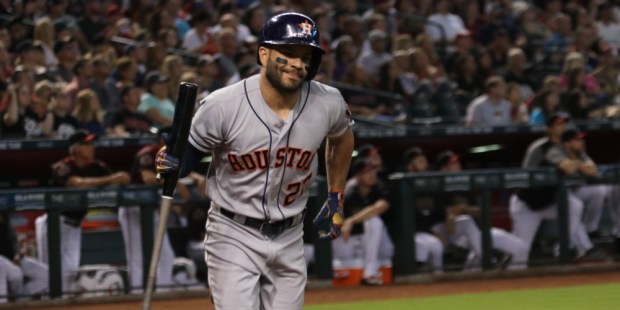 The Houston Astros reach the World Series on a walk-off home run in the bottom of the 9th.

Yankee fans thought they had a chance at game 7 of the ALCS, after DJ LaMahieu tied the game up with a two-run home run in the top of the 9th inning. Both the Yankees and the Astros looked like they were prepared to go into extra innings when Jose Altuve walked up to the plate to face the Yankees closer and pitching ace Aroldis Chapman. There, in the bottom of the ninth with one man on, Altuve hit a rocket 2-run walk-off home run to send the Astros to the World Series and the Yankees back to New York for the off season.

As he rounded the bases and crossed home plate into the waiting arms of his teammates, Altuve could be seen pointing skyward, in a silent thanks to God. Then, when Ken Rosenthal approached Altuve for an on-field interview, the 2017 MLB MVP immediately spoke up and gave the glory of the moment to the Lord.

“First, I want to thank God and all the fans for the beautiful game, for the beautiful playoffs,” Altuve said, adding later, “Running around the bases, the only thing I was thinking was thanking God and just thinking that we’re going to the World Series once again.”

This is not the first time that Altuve has credited God with his uncanny baseball skills. In 2017, after fielding the final out against the Dodgers to send the Astros to the World Series, he told the Houston Chronicle:

“To achieve success wasn’t to get into the major leagues or have the best season in the world. The best success is to live your life the way God wants you to. If you can do that, if you can be good with God, then I think you will have success in your life.” Altuve continued, “We need to not just ask God but thank Him for everything like our health, our family.  And ask Him to bless our homes and to always be present in our daily lives. And to keep us safe is most important.”

Altuve and the Astros will begin the World Series against the Washington Nationals on Tuesday, October 22. The Astros are highly favored to take the championship, but with Washington coming off nearly a week’s rest they could give the Astros more of a challenge than they bargained for.