Scourging at the Pillar: The punishment that makes us whole 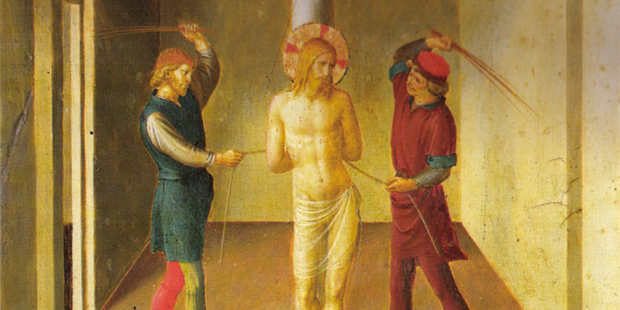 In this month of the Rosary, take a moment to reflect on the Second Sorrowful Mystery.

Let all men know that grace comes after tribulation. Let them know that without the burden of afflictions it is impossible to reach the height of heaven. – St. Rose of Lima

How many times have we compromised with sin? “This or that vice is not as bad as it might be,” we say. “I could do worse,” we tell ourselves. We console our consciences, attempting to assuage them with hollow words. We witness Pilate here attempting the same: Perhaps if I only wound him a little, they will be appeased. “Must I hand him over?” Pilate thinks.

Pilate would attempt to quench their bloodlust by simply having our Lord scourged, but this would not mollify the mob.

When Pilate saw that he was not succeeding at all, but that a riot was breaking out instead, he took water and washed his hands in the sight of the crowd, saying, “I am innocent of this man’s blood. Look to it yourselves.” And the whole people said in reply, “His blood be upon us and upon our children.” Then he released Barabbas to them, but after he had Jesus scourged, he handed him over to be crucified. (Matthew 27:24-26)

Even just one drop of blood seeping from his sacred body would have been enough to redeem the human race. The price of salvation could have been paid by the smallest bit of our Savior’s blood. And yet, Christ not only offers his blood, he meets death with death. Christ shows himself not only willing to suffer for us, but to die. He sheds not only his blood, but he pours out his very life.

As the words of the medieval hymn Stabat Mater sing, “Pro peccátis suæ gentis, vidit Iésum in torméntis, et flagéllis súbditum. / For the sins of His own nation saw Him hang in desolation, all with bloody scourges rent.” Mary, the Mother of the Lord, gave him the blood she saw flow from his holy wounds. Struck and stung, he offered each blow for our redemption. He paid the price with the flesh she had given.

Wounded so, our blessed Lord fears not humiliation. He embraces the lowliness of human estate, descending even to the lowest state of human estate. He is whipped, the punishment for breaking the law, as if he were a wayward citizen or a faithless servant. We, who would imitate our Savior, must embrace the lowest place. We must not despise humility.

Read more:
Praying for humility when you love compliments

It was not enough for Christ to dwell among us; he takes the lowest place among us. He assumes our guilt. “Yet it was our pain that he bore, our sufferings he endured. We thought of him as stricken, struck down by God and afflicted, but he was pierced for our sins, crushed for our iniquity. He bore the punishment that makes us whole, by his wounds we were healed (Isaiah 53:4-5).

Each lash become for us a cord of mercy. As wounds are opened upon him, the wounds of our hearts are sewn closed. The whip becomes for us a true instrument of salvation.