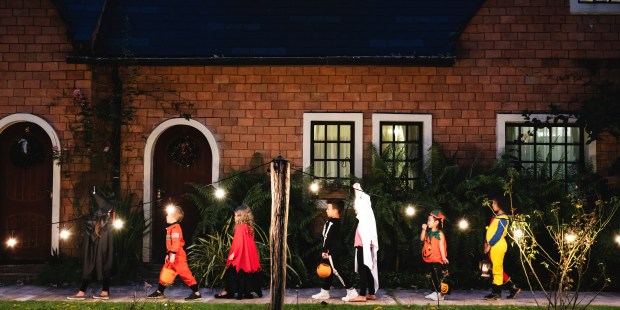 Not so crafty and don’t want to waste money? Here are some actual great ideas that are fun for the whole family.

Here we go, y’all. We’ve got a week until Halloween and if you’re anything like me, you’re staring at your calendar in confusion wondering what happened to October and what the heck you’re going to do about Halloween costumes. Because alas, gone are the days when kids are content to be draped in a sheet with holes poked over the eyes and walk around saying, “boo!”

Of course, you can run to the local Target and get an overpriced, cheaply made, dreadfully uncomfortable and ill-fitting costume for your child to complain about as they beg for candy. I’ve definitely done that. But this year, I’m not feeling it. Five kids means dropping at least $100 bucks on costumes that they’ll destroy over the course of the evening and I am not about that life. Instead, my kids and I put our collaborative skills to work and came up with a list of five quick and easy Halloween costumes you can make with stuff around your house (and maybe a quick trip to Walmart). Important point: unlike Pinterest’s idea of DIY, these are costumes you can pull off regardless of skill level. Read: no sewing required.

By the way, if you’re heading to an All Saints’ Day party instead, these costumes aren’t going to cut it — in that case, pull together some outfits from the closet that resemble your favorite saint or biblical character. If you don’t pull it off well, that’s okay — it’s an All Saints’ Day party; everyone will forgive you. The costumes below are strictly meant for the non-crafty busy mom who’s going to let her kids go trick-or-treating, but desperately needs to help them with costumes pronto.

This one is the brainchild of my teenager, who got a group of her friends together last weekend to make these costumes for a Halloween festival. They took a quick trip to Walmart and bought oversized men’s sweatshirts of various colors, cut the sleeves out, and wrote “M&M” on the front in Sharpie. Of course, if you’re a crafty person you could use fabric paint, but spoiler alert: I am not. We used sharpies. They wore black leggings and black long-sleeved shirts underneath and completed the look with white gloves and white tennis shoes. Viola. Instant M&Ms.

My 9-year-old Liam requested this costume again this year. It’s his favorite, and I am so happy to comply because y’all — this one is dead simple. The real key here is a cheap Halloween makeup tray. Use the browns and blacks to paint werewolf hair around the jaw and upper lip (or go crazy and smear it everywhere over the face like my kid did). Throw in some plastic fangs, and mess that hair up with some gel or mousse. Really go for it — make your kid’s hair as haphazard as a Picasso painting. For clothes, just take a plain white t-shirt and cut some slashes across the front and along the bottom edge. Pair it with jeans and sneakers and boom. Done.

I know not everyone likes the undead side of Halloween, but we like to embrace the spooky side of the season. Pretty sure Chesterton told us to. And nothing is spookier than a zombie shuffling around, begging for brains. Or candy. Mostly candy. Plus, you can use the rest of that face-paint tray, since you’ve got plenty of white and green left over from your werewolf. The pallor is important — make it white and add some green highlights under the eyes and cheekbones. A little trickle of red around the mouth or forehead adds some authenticity but fair warning: younger kids can be scared if you go overboard with the gore. The cool thing about this costume is that if you get the face paint right, you can pair it with anything. One year I wore a dress, an apron, and one shoe (which created an instantly authentic shuffle) and went as a zombie housewife. You can even use elements of last year’s firefighter costume — the sky is the limit here.

This one was my crowning glory in college, and the first time I realized I had a talent for turning random stuff into costumes. Three of my friends and I got some yellow and orange shorts and t-shirts, red belts, and cut up t-shirts of various colors to make our respective turtle’s arm and knee bands. But before we put them on, we painted our limbs, necks, and faces green. Yep, all of them. We covered our backpacks with brown construction paper, threw on our costumes and our turtle shells, and went out to become the actual hits of the campus party. Yes, it took a long time and a lot of coconut oil to get the green paint off. But it was worth it. Cowabunga, dude!

I know, I know — everyone is a superhero on Halloween. But not everyone is clever about it. Tell your kids to think beyond the bat masks and red capes and make up their very own superhero. Your high schooler can rock a pocket protector, suspenders, thick glasses, and a white cape on which he or she has written the periodic table (bonus points: doubles as studying) to be the superest nerd ever. If it’s warm where you are, your even-keeled child can throw on some sunglasses, casual shorts, a Hawaiian shirt, and cut a grass skirt from past years into a cape to be SuperChill. If you’ve got a junior high boy who’s into puns, he can wear some baggy jeans, a white t-shirt, a fake gold chain and sunglasses. Add on a cape and an old pair of wings (any kind — his little sister’s fairy wings would make it even funnier!) and now, he’s SuperFly.

So don’t feel the pressure to drop a lot of money on cheap costumes. Get your kids involved, get those creative juices flowing, and creating your own Halloween costumes can be a fun, hilarious family project. The best part is that hands-down, they’re sure to have the best costumes on the block. And we all know that the best costumes get the best candy.

Read more:
Why I love All Saints Day: These people aren’t so different than me