The monastery where Eastern and Western Catholic monks live together 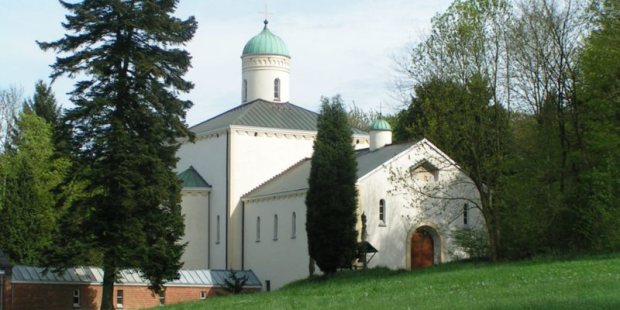 It’s halfway between Brussels and Luxembourg, but it might as well be between Rome and Constantinople.

Formally a Catholic abbey, it is a common home to monks from both Roman and Byzantine traditions.

Normally, a church or monastery will follow only one ritual tradition. But the monk who founded Chevetogne was following the inspiration of a 20th-century pope in creating a space for both to live side by side.

Pope St. John Paul II encouraged the Roman Catholic Church to know the Eastern traditions better, famously saying that the Church must “breathe with both lungs,” East and West. But a prior pope, Pius XI, also encouraged such exchange.

Pius, who served as bishop of Rome from 1922 to 1939, wrote an apostolic letter, “Equidem verba,” encouraging the Benedictine Order to work for the restoration of communion between the Catholic and Orthodox Churches, with particular emphasis on the Russian Orthodox Church.

The following year, 1925, Benedictine Fr. Lambert Beauduin (1873–1960) established a community devoted to Christian unity at Amay, on the river Meuse. Fr. Beauduin was already active in the liturgical moment, and when he became familiar with the Christian East he realized the extent to which the Churches are divided. He became a pioneer of the ecumenical movement.

According to Michael S. Driscoll, writing in the Catholic Historical Review, it was during Beauduin’s years in Rome (1921–25) while preparing lectures on ecclesiology for the Pontifical University of San Anselmo that he became acutely aware of the problem of Christian unity through his contacts with Anglicanism and the Christian East.

“These years nourished his ecumenical outlook that led to the foundation of the Monastery of Unity in 1925 (later transferred to Chevetogne),” Driscoll wrote. “Beauduin established a new approach toward separated Christians that was founded on respect and love rather than one based on the desire to proselytize. It consisted in listening to an individual to know and understand him or her but still remaining true to one’s own convictions.”

In 1939, the community of Amay Priory moved to its current location at Chevetogne. An Eastern church was built in 1957 and painted with frescoes, and a Western church was completed with a library in its basement. The library has approximately 100,000 volumes and subscribes to about 500 specialized journals and periodicals.

The abbey’s website says that the aim of the community is “to understand as deeply as possible the Christian soul of the West and the East, beyond all limits of confession.”

The monks are liturgically organized in two groups, one celebrating according to the Western tradition, the other according to the Eastern Byzantine tradition. This has been the fundamental option from the very beginning, the two rites having been adopted for ecumenical reasons, in view of the reconciliation between the Christian East and West. In this way the community wishes to embody the primacy of prayer. It is prayer that unites every person, through a laborious path of conversion, as it prepares our communities and Churches to receive fully the gift of unity.

Shawn Tribe, founder of the website New Liturgical Movement, wrote that the community was started “very much with the idea that the Christian East and West should become better acquainted with each other, and the promotion of Christian unity. The apostolic letter Equidem Verba of Pope Pius XI to the abbot primate of the Benedictine Order, drew attention to the importance of Christian unity, and this presented Beauduin with the idea to realize his project.”

In addition to praying for Christian unity and living a life where both Eastern and Western traditions are lived out and valued, Chevetogne also publishes an ecumenical journal called Irénikon, entirely devoted to the promotion of Christian unity. Monks also publish recordings of themselves signing Byzantine chants and produce icons.

The Liturgy is celebrated mainly in Slavonic, and sometimes in Greek. In the following video, the monks chant the Polyeleos, a hymn of praise sometimes sung at Matins. It consists of verses from Psalms 134 and 135, and one of the refrains we hear is “Alleluia! For his love (or mercy) endures forever. Alleluia! Alleluia!” According to the Metropolitan Cantor Institute of the Ruthenian Catholic Archeparchy of Pittsburgh, the name Polyeleos comes from the Greek word for “much mercy,” from the repeated mention of mercy. Lamps or candles are lit around this point in Matins, which may have influenced the name of the hymn: in Greek, Polyeleos also means “much oil.”