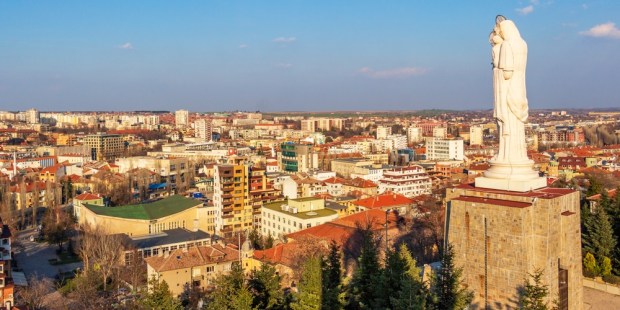 The Monument of the Holy Mother of God in Hoskovo, Bulgaria stands more than 100-ft tall (30 meters) and is visited by pilgrims and tourists alike

Haskovo is the seventh largest urban area in Bulgaria. As it is close to the Aegean Sea and the Greek and Turkish borders of the country, it enjoys Mediterranean-like weather during its long summers (from May to October, approximately) and continental-climate conditions in winter.

According to a relatively recent census, Haskovo is home to fewer than 200,000 people, and to a monument which, according to Guinness World Records, is the tallest statue of the Virgin Mary with the Infant Jesus in the world. The tallest statue of the Virgin Mary in the world is still the Monument to Our Lady of Peace in Venezuela, but the Philippines are about to finish a new, even taller statue, in 2020.

Read more:
In the Philippines, the soon-to-be tallest statue of the Virgin Mary in the world is about to be ready

The statue, known as the “Monument of the Holy Mother of God,” stands at a total height of 31 meters (102 feet when you include the pedestal, where a small Orthodox chapel is included) at the top of a hill in the southwest of the city, so it can be seen from anywhere in the city, even at night. The work of several different local artists, it is made from polymer concrete.

The Virgin Mary is the patroness of the city of Haskovo. In fact, the feast of the Nativity of the Mother on God, celebrated on September 8th, was officially proclaimed as the Day of Haskovo in 1993.

Read more:
This statue of the Virgin Mary is taller than the Statue of Liberty

Almost a decade later, in 2002, the municipal council of the city approved the construction of the monument, requiring 150,000 euros to build it. Donations from the citizens of Haskovo and the sales of postcards with the image of the future monument (2.50 euros each) made it possible to collect all the funds needed quite quickly.

Nowadays, the Monument of the Holy Mother of God is the main symbol of Hoskovo, and one of the top 100 tourist sites of Bulgaria.