This woman’s baby lived just hour after birth, so she donated her breastmilk to other babies in need 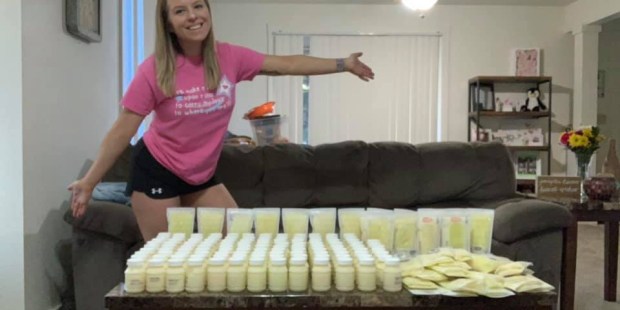 Alexis and Michael Marrino faced with generosity and love the worst sorrow a parent can experience.

It only takes one hour to change the world. That’s not a slogan, it’s a fact of life. If we try to complicate things more than that, we’re just looking for an excuse. The true value of our presence is found in what Tolkien wrote, “All we have to decide is what to do with the time that is given us.”

The time that McKinleigh Marrino was given to live was brief: just eight months in her mother’s womb, and then an hour in her parents’ arms. Her presence, though, didn’t pass like a breeze that barely rustles a few leaves.

Alexis and Michael Marrino, a young couple from South Dakota (she’s 22 and he’s 25), experienced the most dramatic turn of events possible for parents: the discovery, after the initial enthusiasm of their pregnancy, that their child was affected with a condition incompatible with life. They were confronted with a diagnosis of anencephaly, which is when a child’s brain doesn’t develop, leaving no hope for treatment and a very small window for survival outside the womb: newborn children with this condition only survive a few minutes, or usually an hour at most.

Remembering that moment, Alexis wrote on Facebook, “I’ll never forget hearing the words ‘we couldn’t find any brain activity’ and everything just went blank. I felt like I couldn’t breathe. From being so happy to bring a little baby into this world to finding out we were going to lose one was too much.” After a few days of wrestling with the situation, they decided that they wanted “to meet and hold her. I’m so glad I made that decision,” Alexis says in that post.

On July 29th, 2019, McKinleigh Jade Marrino was born almost a month early, and lived in the arms of her parents for 1 hour and 10 minutes. Alexis recounts on Facebook, “Feeling her small, warm body on my chest was too magical. As she was still with us, we got to baptize her and, shortly after, she passed in my arms. We got to dress her, get her foot and hand prints, get some hand and foot molds and Michael even got to change her diaper. A few hours later, the funeral home picked her up and we had to let her go.”

Pregnancy is a relationship, not just a condition of the mother. Alexis’s body was ready to nourish that newborn life, and before discovering the diagnosis of anencephaly, Alexis had embraced with enthusiasm the plan of breastfeeding. She had prepared herself through reading and study. After their daughter was born and had gone all too soon to heaven, since Alexis couldn’t breastfeed her own daughter, she decided that she would donate her milk to other babies in need. “I couldn’t save her, but at least my breast milk could save a lot of little babies’ lives,” she said in a post on Facebook.

So for seven weeks, the duration of her maternity leave, she pumped her breast milk and kept it with the proper care. She produced 1,130 ounces in total, which she donated to the hospital.

It was far from easy. In another post, she wrote, “It was a long and hard and even painful journey, but it was worth it. There were days that I just cried because I kept thinking ‘how is it fair that I’m doing this for someone else’s baby instead of mine!?’ But, through it all, I kept going and I’m finally done! I wanted to make McKinleigh proud and I’d like to think I did.”

As is evident from this and many of her public posts about the whole experience, Alexis’ husband was at her side throughout to support her. Their decision to recognize the value and humanity of their child’s life, as short as it was, and to share the bounty of Alexis’s maternal milk with other children in need, is a beautiful testimony to their love for each other and for their daughter and for the rest of the human family. Nothing can take away the pain of their loss, but their ability to contextualize it and love in the midst of their pain reflects the strength of the human spirit.

Read more:
“Our daughter Ester lived for an hour, and made all things new”