3 Mistakes we make in prayer; and 3 times we get it right 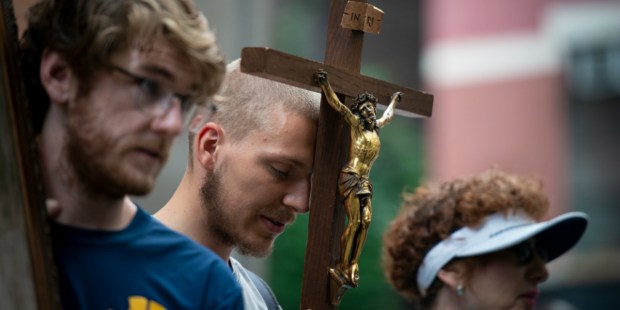 Happily, the Church does a really good job of helping us find the right attitudes

Jesus has good news and bad news for religious people this Sunday.

Jesus points to two examples of prayer this Sunday, the 30th Sunday in Ordinary Time, Year C. The bad news is that we often make the same prayer mistakes the Pharisee makes in his story — but the good news is, the Church has made sure we also often imitate the tax collector.

Our first mistake is that we direct our prayer to the wrong place.

“The Pharisee took up his position and spoke this prayer to himself,” begins Jesus.

Not only do we do this, a lot, but some of us pride ourselves on it. When we say we are more “spiritual” than “religious,” we probably mean that we are reflective and understand the deeper dimension of our lives.

We may even pray. We reflect on our lives, trying to be the best version of ourselves, and get in touch with our feelings. And that’s good, in its proper place. But think of what it might mean: To “reflect” is literally self-contemplation, and to focus on our self means to “take up a position” that’s inappropriately close to God’s.

Thank God for the Church, which constantly puts us back in the position of the tax collector.

“But the tax collector stood off at a distance and would not even raise his eyes to heaven but beat his breast and prayed, ‘O God, be merciful to me a sinner,’” Jesus says with approval.

The Church makes sure we all do this: When we pray the Penitential Act at the beginning of Mass we literally beat our breast like the Publican, and echo his plea for mercy.

Our second mistake is to compare ourselves to bad role models.

Next, the Pharisee says, “O God, I thank you that I am not like the rest of humanity — greedy, dishonest, adulterous — or even like this tax collector.”

By comparing himself to hardened sinners he is as absurd as a runner who compares himself to crippled people; or like us when we look at our lives and compare them to people who haven’t had the gifts we have had — the disciples who reached us and the grace of conversion.

His pride makes him imagine the “rest of humanity” is bad. We do this all the time — judging those of another political party or religion, or other Catholics who aren’t like us.

Read more:
“But, I don’t do bad things”: Pope Francis explains why that’s not enough

Again, the Church helps prevent this mistake by reminding us who we are imitating, and who we are with.

The tax collector focuses on God’s mercy — and puts himself in the category “sinner.”

The Church helps us do the same thing, but putting Jesus Christ before us as our example — in the crucifix and tabernacle that are central focuses at our churches and the crucifix on our Rosary — and by putting us squarely in the company of sinners in our prayers from the Our Father’s “forgive us our trespasses” and the Hail Mary’s “pray for us, sinners” to our prayer before communion, “Lord I am not worthy to receive you.”

Which brings us to our third mistake: We expect God to be impressed with us.

Next, the Pharisee brags to God, saying, “I fast twice a week, and I pay tithes on my whole income.”

I can’t be the only person who does this, also. It seems that my spiritual life has two modes: I’m either falling short of my goals, and feeling guilty about it, or I have actually gotten my act together and feel like Humanity’s Greatest Gift to God.

Both the guilt and the pride are wrong. As the Psalm says, “The Lord is close to the broken hearted, and those who are crushed in spirit he saves.” And as the first reading says, God “knows no favorites,”

He is God; any gain we make is just us cooperating with his reality, and any falling short we do in our lives is just a missed opportunity.

The tax collector is the one in the story who impresses Jesus, and St. Paul knows his secret.

The tax collector’s secret is that he receives from God what he needs. It’s the same with St. Paul.

At first it can seem like St. Paul in the second reading is a lot like the Pharisee. It sounds like bragging when he says, “I have competed well; I have finished the race; I have kept the faith. From now on the crown of righteousness awaits me.”

But look at the context. This “crown of righteousness,” will be awarded “to all who have longed for his appearance” and Paul is included only because “the Lord stood by me and gave me strength” after he “was rescued from the lion’s mouth,” he says.

In short, Paul follows the formula the Church has presented us with this October. The Gospels have presented three images of prayer: The leper who thanked Jesus for his cure, the widow confronting the unjust judge, and today. The lesson: our prayer should be grateful, constant, and humble.

Read more:
Simple advice from Benedict XVI on how to be a better mom or dad