Carrying the Cross: That magnificent and shining instrument 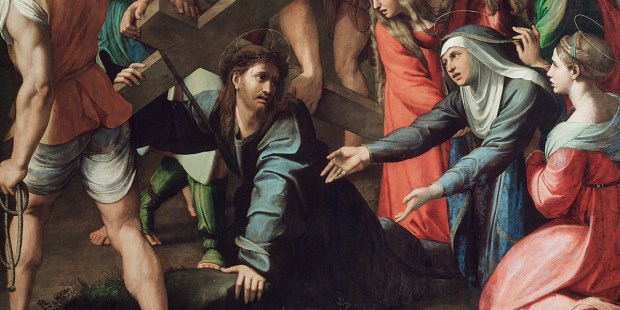 In this month of the Rosary, take a moment to reflect on the Fourth Sorrowful Mystery.

Abroad the regal banners fly,
now shines the Cross’s mystery:
upon it Life did death endure,
and yet by death did life procure. ~Vexilla Regis

Christ did not fear the cross, he embraced it. Clinging to the wood of the cross, our Lord boldly undertook the work of our redemption. That no man might fear death, Jesus runs to an excruciating death.

St. Augustine says, “Now there are some men who, although they do not fear death in itself, are yet troubled over the manner of their death. In order, then, that no kind of death should trouble an upright man, the cross of this Man had to be set before him, because, among all kinds of death, none was more execrable, more fear-inspiring, than this.” The Lord has conquered death, by laying to waste one of death’s most vicious ministers.

As they led him away they took hold of a certain Simon, a Cyrenian, who was coming in from the country; and after laying the cross on him, they made him carry it behind Jesus. A large crowd of people followed Jesus, including many women who mourned and lamented him. Jesus turned to them and said, “Daughters of Jerusalem, do not weep for me; weep instead for yourselves and for your children, for indeed, the days are coming when people will say, ‘Blessed are the barren, the wombs that never bore and the breasts that never nursed.’ At that time people will say to the mountains, ‘Fall upon us!’ and to the hills, ‘Cover us!’ for if these things are done when the wood is green what will happen when it is dry?” Now two others, both criminals, were led away with him to be executed. (Luke 23:26-32)

The Daughters of Jerusalem, weeping at the kind of death Jesus was to die, echo the tears of countless holy women who have gone before them. Tears were shed by the mothers of Israel, when Pharaoh drowned their children in the Nile (Exodus 1:22); Rachel wept when her children were carried into exile (Jer 31:15); the mothers of the Holy Innocents poured forth tears when their children were slaughtered by Herod (Matthew 2:16). And yet now, Christ tells the holy women present: do not weep for me.

“Jesus Christ,” as the fabled carol sings, “was born for this!” We ought not weep at the sight of the Savior’s cross. It is not a cause for sorrow. He has come to carry it. From the wood of the manger to the wood of the cross; this is the meaning of the life of Jesus. At a glimpse of the cross, each Christian soul should rejoice! We should weep only for ourselves, that is, over our sins.

The cross—that magnificent and shining instrument—stretches out in every direction: up and down, east and west. Its wood proclaims the grace of salvation, sending ripples forth through the entire fabric of the universe. Impaling rock below, extending through sky above, encompassing left and right, the glory of the cross penetrates all that is seen and unseen.

When once a tree was cause for our downfall, now a tree is cause of our redemption. What Adam lost by the fruit of a branch, Christ recovers in the branch of salvation. The wood of the cross had many figures: Noah’s wooden ark, Moses’ staff, the Ark of the Covenant, the poles of the meeting tent, the wooden panels of the Temple, the serpent mounted to a pole. All these types were instruments of God’s work, yet none so powerful as the cross. Our Lord knew the wonders God had worked in ages past, and saw in the cross hope for years to come.

Read more:
In Orthodox iconography, the Virgin Mary is also the Burning Bush