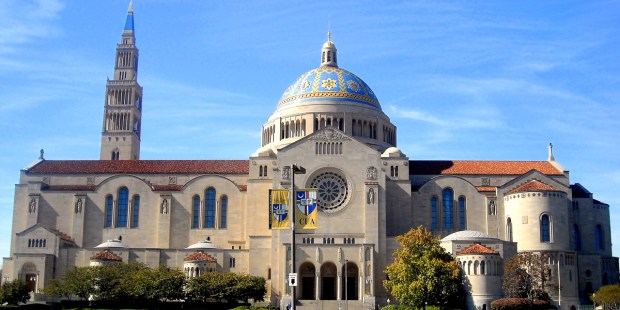 A new musical setting for the Mass will receive its premiere at the Basilica of the Immaculate Conception.

It’s not often that a new musical setting of the Catholic Mass is undertaken. For most Catholics attending Sunday—and especially weekday—Mass, the liturgy is mostly recited, with a few hymns thrown in. It’s a far cry from the Middle Ages, when the Mass, especially its “ordinary” parts—the Kyrie, Gloria, Credo, Sanctus and Agnus Dei—were sung, in what is now referred to as Gregorian chant, or in later periods, when choirs embellished the texts in elaborate polyphonies.

The Baroque, Classical and Romantic periods saw multiple settings undertaken by composers who intended their works not so much as liturgical pieces as concert hall oratorios. Bach, Beethoven, Mozart, Schubert and others composed some of the better-known “Masses.”

Since the Second Vatican Council, a number of church composers have produced settings that are intended to help congregations sing, thereby participating more fully in the liturgy. Many of these have been considered aesthetically and spiritually unsatisfying.

On Saturday, November 16, Massgoers in Washington, D.C., will hear a new setting that may have some of the characteristics of the classical Masses of the past few centuries but also is meant to carry the spiritual aspirations of people praying the liturgy. The composer is Frank La Rocca, and his work is titled “The Mass of the Americas.” Its first performance will take place in the context of a Solemn High Pontifical Mass honoring the Blessed Virgin Mary under her titles of Our Lady of Guadalupe and Our Lady of the Immaculate Conception (the Patroness of Mexico and all of the Americas, and the Patroness of the United States). Archbishop Salvatore J. Cordileone of San Francisco will serve as the principal celebrant.

Archbishop Cordileone founded the Benedict XVI Institute for Sacred Music and Divine Worship in his archdiocese to encourage beautiful liturgy and energize “a Catholic culture of the arts,” Maggie Gallagher, the institute’s executive director, explained in an article in the Catholic Herald. Gallagher, founder of the National Organization for Marriage, quoted Cordileone as saying, “Amid many devastating scandals, sins, and problems, the greatest crisis the Church faces today is the loss of the sense of the sacred. Beauty has a power to lift hearts and souls to the reality of God.

“This is the revival of the Renaissance and Counter-Reformation model,” Cordileone continued, “beautiful sacred music composed from the heart of the Faith finding new audiences by moving through the great cathedrals, churches and shrines of the world.”

La Rocca, who is the institute’s composer-in-residence, compared the commissioning of the Mass to the time after the Council of Trent in the 16th century, when the Church, in the wake of the Protestant Reformation, supported “the creation of music and other arts that symbolically proclaim who she is and what she teaches, and to use the power of beauty to draw people into an encounter with those things.”

“Beauty has the power to directly form the soul and prepare it to receive Truth,” La Rocca said.

The Mass of the Americas will be sung by the Benedict XVI Choir. It is also being performed on a “Marian church tour” that includes the U.S. cities of San Francisco, Houston and Dallas, as well as Mexico City and Tijuana. The November 16 event in the National Shrine will be accompanied by a conference of artists, composers, musicians, poets, and painters, hosted by the Catholic University of America’s Rome School of Music, and a Benefit Dinner and Artists Salon at the National Arts Club (the historic home of President James Monroe). More information can be found at MassOfTheAmericas.com.