Crucifixion: The division between God and man is torn 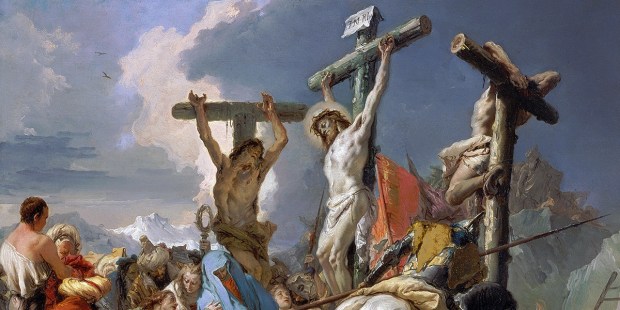 In this month of the Rosary, take a moment to reflect on the Fifth Sorrowful Mystery.

“The earth—our earthly nature—should tremble at the suffering of its Redeemer. The rocks—the hearts of unbelievers—should burst asunder. The dead, imprisoned in the tombs of their mortality, should come forth, the massive stones now ripped apart.” – Pope Saint Leo the Great

The death of Christ tore the veil in the Temple. The veil, which divided the holy of holies, the sacred dwelling place of the Lord God, was ripped open. As blood poured forth from the side of Jesus on Calvary Hill, the veil, the division between God and man, was torn.

Jesus cried out again in a loud voice, and gave up his spirit. And behold, the veil of the sanctuary was torn in two from top to bottom. The earth quaked, rocks were split, tombs were opened, and the bodies of many saints who had fallen asleep were raised. And coming forth from their tombs after his resurrection, they entered the holy city and appeared to many. The centurion and the men with him who were keeping watch over Jesus feared greatly when they saw the earthquake and all that was happening, and they said, “Truly, this was the Son of God!” (Luke 27:50-54)

Jesus freely offers his own self. Because of our death in sin, he undergoes death for us. Jesus alone reconciles the fallen world. He is the true Lamb of God, who takes away every sin. Many have served as mediators between God and man. Abraham, Moses, all of the holy prophets… yet none could redeem humanity by offering their own blood. And that is precisely what Christ does: he offers his life, laying it down, for his friends.

When Jesus hands over his spirit, he declares, “It is finished” (John 19:30). Christ’s death fulfills all the promises of God of old. And yet this is not the end. Christ’s death is only the beginning. At such a sight, the Church cries out, “Hail Cross, our only hope!” The cross of Jesus, because it is the instrument of his death, becomes for us a sign of life. The death of Jesus begins something new.

Like the blood of the lambs, which the Israelites spread over the doors of their homes in Egypt, the blood of Christ spares us from death. But lamb’s blood was a figure, a sign of what was to come. Blood and water pouring forth from the side of Christ on the cross is the strength and life that Christ gives his Church.

The Virgin Mary, witness and vessel of this work’s beginning, sees its end. She who welcomed Christ into this world, stands at the foot of the cross, as the Lord breathes his last. She knows what this work means. In her own flesh, she knew a taste of what the union of God and man could mean. And yet, all the wonders of her life, all the graces and merits she knew, were given life only because of his death. On Calvary, standing by her son, Mary, the New Eve, believes that Jesus Christ “makes all things new” (Rev 21:5).

We adore your Cross, O Lord, we praise and glorify your holy Resurrection,
for behold, because of the wood of a tree, joy has come to the whole world. – Antiphon, Good Friday