The Ku Klux Klan vs. Catholics: a sad chapter in American history 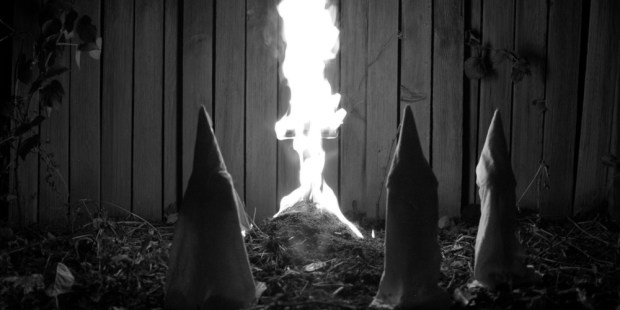 Americans who were proud of their heritage were wary of immigrants and an eventual papal takeover.

The activities of the Ku Klux Klan against African Americans and the cause of civil rights has been well documented. Medgar Evers; Cheney, Goodman and Schwerner, and the four girls who died in the 1963 Birmingham church bombing are only a few of the tragic stories involving the KKK.

But black Americans were not the only targets of the organization, which traces its beginnings to the Reconstruction period after the American Civil War. Catholics in America have felt its sting as well.

There have been three iterations of the Ku Klux Klan: the original one, which flourished in the late 1860s; the second, which had its peak in the 1920s, and the third, which saw multiple Klan groups fighting the civil rights movement from the 1950s onward.

The D.W. Griffith film “The Birth of A Nation,” which extolled the KKK’s role after the Civil War, inspired the revival of the Klan around 1915. After the First World War, the Klan began to attract hundreds of thousands of recruits throughout the country.

“Much of the second Klan’s appeal can be credited to its militant advocacy of white supremacy, anti-Catholicism, anti-Semitism, and immigration restriction,” said the New Georgia Encyclopedia, “but the organization also attracted the support of many middle-class Americans by advocating improved law enforcement, honest government, better public schools, and traditional family life.”

An online history of the University of Notre Dame, where students had some run-ins with the local Klan, relates that the Klan’s stories about the Catholic Church, Catholic priests and Catholic institutions were “so gross and overdrawn as to attract only the more ignorant, and fool only the most gullible.”

In an article in the Catholic Herald, Jonathan Wright, author of Layered Landscapes: Early-Modern Sacred Space Across Faiths and Cultures, presents a litany of offenses against Catholics carried out by the Klan. From his description, one might imagine that “KKK” actually stands for Keep Kicking Katholics.

Part of the problem was that Klansmen (and women) prided themselves on their undivided loyalty to America. And Catholics were apparently incapable of that patriotism.

“As one Arkansas member put it, the loyalty of Catholics was across the sea and the religion they profess is a foreign religion … the quicker we invite them to go back to the other side of the big pond the better it will be for us,’” Wright noted. “A typically rabid editorial in one of the Klan’s many periodicals—with the suitably sinister headline ‘To Your Guns!—hammered the point home to its readership: ‘Drop not your fiery cross but carry it over vale and hill till pagan Roman Catholicism is expelled from our fair and free American life forever.’”

A Klansman named Caleb Riley proudly wrote, with respect to the Pope of Rome, “I am an Anglo-Saxon white man, and so constituted and trained that I cannot conscientiously take either my politics or my religion from some secluded ass on the other side of the world.”

One of the saddest things that happened during this period was the murder of a priest, Fr. James Coyle. Born in Ireland, Coyle moved to the Deep South of the United States to serve as a parish priest. Immigration from Catholic nations had swelled in and around Birmingham, Alabama, because of the jobs that were available, but that caused friction with the local population. Fr. Coyle became well known for standing up for his parishioners from attacks of various sorts and for letters to the editor of the local newspaper he wrote in defense of the Catholic faith.

Ruth Stephenson, the daughter of a local Protestant minister, Edwin Stephenson, expressed an interest in Catholicism and ended up getting baptized by Fr. Coyle. Her father, a member of the Ku Klux Klan, was horrified. Stephenson tried in vain to control his daughter, but she went even further: she married a Puerto Rican Catholic. When Stephenson found out—and discovered that it was Coyle who officiated—he made his way over to the rectory, where he found the priest sitting on his porch reading his breviary. With three shots from a revolver, he ended the priest’s life.

Stephenson was put on trial and was defended by Hugo Black, a fellow Klansman and future U.S. Supreme Court justice (he quit the Klan before becoming a U.S. senator). Stephenson’s defense was that he had gone temporarily insane when he learned that his daughter had married a Catholic. The judge and jury were both Klansmen, and Stephenson was acquitted.

Immigration from largely Catholic countries had a lot to do with the prevailing sentiments. The Klan feared an eventual takeover of the U.S. by the Roman Pontiff, supported by legions of American papists. “The Pope had already bought lands close to DC and was planning a ‘million-dollar mansion’ from which he could mastermind the overthrow of the government,” Wright explained.

It’s no wonder, then, that the first Catholic to have been nominated by a major party to run for the presidency of the United States, Alfred E. Smith, was defeated in the 1928 election. As Wright explained, Klan membership “probably topped four million and it was spread across all 48 states: 700,000 in Indiana, in the region of 400,000 in Texas and Ohio. The Klan was part of the mainstream of American politics, perfectly capable of determining the outcome of elections great and small.”

But it could not last.

“At the very height of its political influence,” the New Georgia Encyclopedia writes, “the second Klan entered a period of steep decline caused by internal feuding, scandals, increased activism by opponents, and the fading of the group’s romantic image. By 1930 the KKK, which had attracted an estimated 5 million members during the early 1920s, was reduced to about 30,000 supporters. Georgia’s KKK membership declined from approximately 156,000 members in 1925 to 1,400 in 1930. The organization limped along for 14 more years before formally disbanding in 1944, after being successfully prosecuted for failure to pay federal taxes.”

But Fr. Coyle’s death in 1921 actually had a lot to do with turning the tide as well. His murder has come to be seen as the “zenith of anti-Catholic sectarianism in the American South,” said James Wilson, writing in IrishCentral.

“Reflecting on the killing some 20 years later in ‘Catholic Weekly,’ a former parishioner, Helen McGough, mused that, the death of Father Coyle was the climax of the anti-Catholic feeling in Alabama. After the trial there followed such revulsion of feeling among the right-minded who before had been bogged down in blindness and indifference that slowly and almost unnoticeably the Ku Klux Klan and their ilk began to lose favor among the people.’”