I was in the Hell of Africa, but there I found Our Lady

This video and heart-wrenching photos will tell you the story of Father Renato Sesana and the children he's offering a refuge.

It has been called “The Hell of Africa,” and when you arrive, you understand why.

It’s the largest slum on the African continent, just a few steps away from the center of Nairobi, Kenya. Nearly two million people live in conditions that are impossible even to imagine for people who come from the West.

After a 10-hour flight and a night of hardly any sleep, I’m catapulted into this multi-colored but merciless reality: houses made of mud, children who play in streams of putrid water and mud among the piles of trash that cover the streets. Dirty barefooted children follow me, curious about my camera.

A profound sense of human misery, mixed with inadequacy, wells up in me.

I’m here for a video project. My home base will be the Kivuli Center, an institution for street children, founded by Father Renato Sesana—whom everyone calls Father Kizito. He’s a missionary who, for years, has been saving street children—mostly abandoned, abused, and malnourished orphans—and welcoming them into the Kivuli Center. In Swahili, the name means “refuge.” 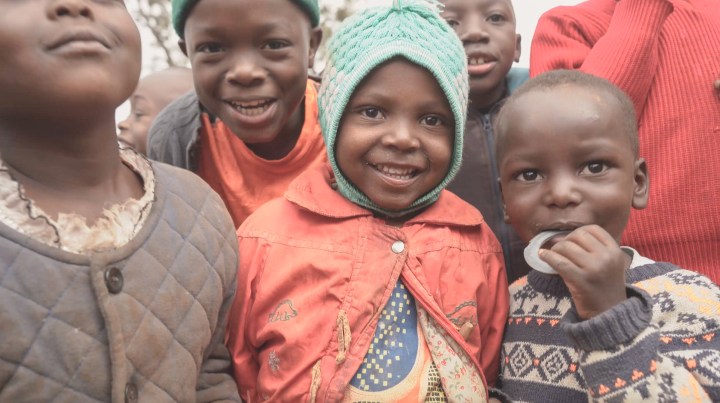 Father Kizito has big, deep blue eyes, in which you can see the sky of Africa where for many years he has carried his heart and Christ’s Church.

The day after my arrival is the Assumption. I discover a small chapel inside the center. An African tapestry is behind the altar, and there are wooden pews—silent, humble, and beautiful. I begin to read a book Fr. Kizito wrote about stories of children in Africa: stories of extreme poverty, but also of deep hope, faith, and spirituality. Slowly, my heart feels renewed.

A few hours later, Mass begins, with children from the center filling most of the roles. They read, and they sing their songs in Swahili. It’s a balm for my heart.

At a certain point, the electricity cuts out, and we are left with the two candles on the altar and the voices of the children who sing to celebrate one of the most important and joyful Masses of the year, a Mass filled with the maternal love of Mary for each one of us and for each one of those children, who, despite it all, have not yet lost the purity in their eyes and the joy in their smiles.

We dance, we sing, and we pray together. In that little chapel, at the center of African Hell, we’re touching a piece of paradise. Mary’s taking all of us with her, and she’s carrying us to heaven for a moment, for an instant of the heart.

That evening, the Holy Spirit touched me, perhaps deeper than at any other moment of my life. That evening, in the dark, the light shone stronger than on any other evening.

In Fr. Kizito and his mission, in the eyes of those children, in the refuge within the chaos, I saw that the resurrection of Christ is real, and it conquers evil. I saw that, as Paul says, neither the sword, nor persecution, nor death, can separate us from His love.

Pope Benedict once said that Africa is “an immense spiritual ‘lung,’ for a humanity that seems to be experiencing a crisis of faith and hope.”

In those brief, long, 10 days in Kibera, I discovered that this is profoundly true. This video is a tiny account of that voyage.