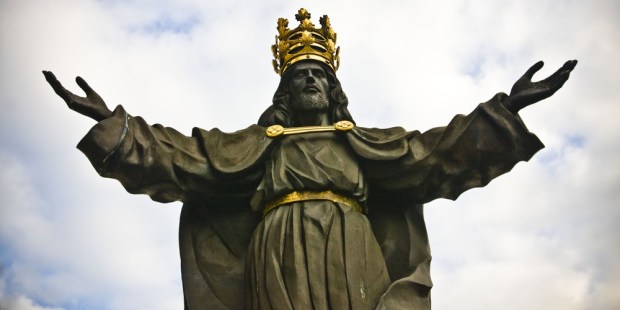 The feast had a close connection to All Saints Day when it was first instituted by Pope Pius XI.

When the world was in turmoil and the increasing growth of secularism was spreading throughout the world, Pope Pius XI sought to combat it with an affirmation that Jesus Christ is the true king to whom we owe allegiance.

He did this by establishing a feast in honor of “Our Lord Jesus Christ the King” in 1925, through his encyclical letter Quas Primas. Pius XI explained, “We firmly hope … that the feast of the Kingship of Christ, which in future will be yearly observed, may hasten the return of society to our loving Savior.”

Initially this feast was celebrated on the last Sunday of October, immediately preceding the feast of All Saints Day on November 1. This was a deliberate choice and Pius XI explains why he chose that date.

The last Sunday of October seemed the most convenient of all for this purpose, because it is at the end of the liturgical year, and thus the feast of the Kingship of Christ sets the crowning glory upon the mysteries of the life of Christ already commemorated during the year, and, before celebrating the triumph of all the Saints, we proclaim and extol the glory of him who triumphs in all the Saints and in all the Elect. Make it your duty and your task, Venerable Brethren, to see that sermons are preached to the people in every parish to teach them the meaning and the importance of this feast, that they may so order their lives as to be worthy of faithful and obedient subjects of the Divine King.

In this way Pius XI was linking our quest for holiness to the kingship of Christ.

The Catechism of the Catholic Church highlights this connection when commentating on our participation in the kingly office of Jesus Christ.

The People of God shares in the royal office of Christ. He exercises his kingship by drawing all men to himself through his death and Resurrection. Christ, King and Lord of the universe, made himself the servant of all, for he came “not to be served but to serve, and to give his life as a ransom for many.” For the Christian, “to reign is to serve him,” particularly when serving “the poor and the suffering, in whom the Church recognizes the image of her poor and suffering founder.” The People of God fulfills its royal dignity by a life in keeping with its vocation to serve with Christ. (CCC 786)

We participate in that kingship when we serve others and order our lives according to the Gospel. The saints in Heaven were successful in that regard and were true servants of the King, pouring out his love to all those in the world.

While this feast was later moved to the end of November to heighten its connection to the end of the liturgical year, this spiritual theme still retains its power and reminds us what it means to be obedient servants of a benevolent King.

We will inherit the joys of the Kingdom only when we recognize our role as faithful servants, ready and willing to do whatever it takes to bring about a reign of love that covers the whole world.

Read more:
Pray this novena to prepare for the feast of Christ the King

Read more:
Why do we celebrate “Christ the King”?