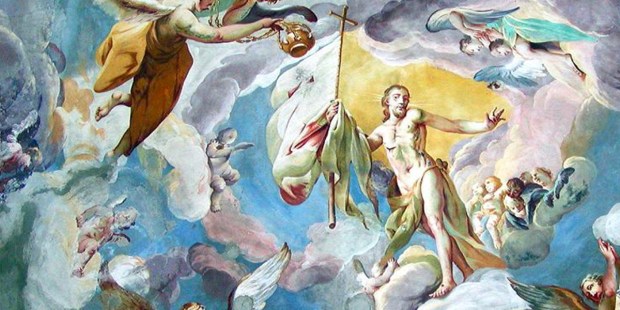 In this month of the Rosary, take a moment to reflect on the First Glorious Mystery.

Come you all: enter into the joy of your Lord. You the first and you the last, receive alike your reward; you rich and you poor, dance together; you sober and you weaklings, celebrate the day; you who have kept the fast and you who have not, rejoice today. The table is richly loaded: enjoy its royal banquet. The calf is a fatted one: let no one go away hungry. All of you enjoy the banquet of faith; all of you receive the riches of his goodness. – St. John Chrysostom

In 15th-century Bavaria, a peculiar Easter custom flourished. In order to flaunt the joy of Christ’s victory over sin and death, homilists would include elaborate jokes in their Easter preaching. The tradition—known as the Risus paschalis, the Easter laugh—captures something of the euphoria which is part and parcel to the Easter feast. Christ conquered death. A church ringing with laughter announces the Good News of the Resurrection. Christ has the last laugh.

After the sabbath, as the first day of the week was dawning, Mary Magdalene and the other Mary came to see the tomb. And behold, there was a great earthquake; for an angel of the Lord descended from heaven, approached, rolled back the stone, and sat upon it. His appearance was like lightning and his clothing was white as snow. The guards were shaken with fear of him and became like dead men. Then the angel said to the women in reply, “Do not be afraid! I know that you are seeking Jesus the crucified. He is not here, for he has been raised just as he said. Come and see the place where he lay. Then go quickly and tell his disciples, ‘He has been raised from the dead, and he is going before you to Galilee; there you will see him.’

That we should live and die no more, a thought which at once seems as impossible as it does marvelous, is brought to pass. Christ Jesus, who once was dead, now lives.

Joseph Cardinal Ratzinger (Pope Benedict XVI) puts it this way, “To the Christian, faith in the Resurrection of Jesus Christ is an expression of certainty that the saying that seems to be only a beautiful dream is in fact true: ‘Love is strong as death’ (Song of Songs 8:6).” The love of God, which has ordered all things to pass, breaks the bonds of chains and suffering which we forged in sin. That we might no longer die but live becomes real. The darkness of death is crushed by an explosion of light. Love wins.

The Resurrection is more than an idea. The fact that Jesus died and now lives confirms all that he did and taught. His purpose was to come into the world, invite man to a new kind of life with God, and make it possible for this way of life to actually be lived. St. Paul captures this mystery, saying, “Just as Christ was raised from the dead by the glory of the Father, we too might live in newness of life” (Romans 6:4).

Christ’s resurrection completes the teaching of Jesus, it finishes the work of the paschal mystery. In the resurrection, life fulfills death.

The discovery of the Risen Lord fuels the evangelical impulse. Seeing Christ in his glorified body, transformed after his torture, Mary Magdalen is filled with holy fear. Jesus himself sends her to “Go and tell the disciples” what she has seen. Not only does the Lord’s resurrection prove the truth of the Gospel, but the resurrection impels us to preach. This great mystery cannot be hidden. The joy of Easter bubbles over; the vision of Christ spurs Mary Magdalen and every Christian on!