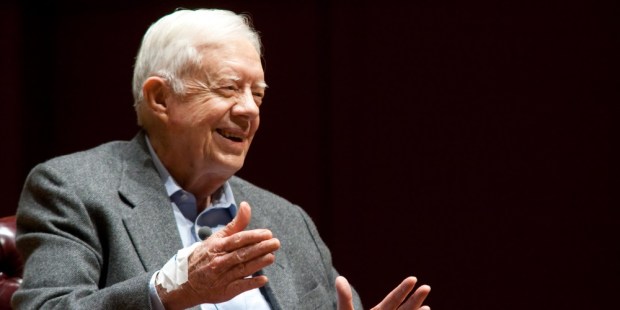 There aren’t too many 95-year-olds teaching Sunday school and doing carpentry. One who is—former U.S. President Jimmy Carter—apparently is not letting a recent hospitalization get in the way.

Carter took a tumble—the second this month—in his home in Plains, Georgia, October 21. CNN reported at first that Carter will miss class again this coming Sunday.

“Due to President Carter’s fall, he will not be teaching Sunday School this Sunday, Nov 3rd,” said Maranatha Baptist Church in Plains on Monday. Carter has taught there for several years. “We welcome and encourage you to still come worship with us as his niece Kim Fuller fills in for him. She will deliver a message just as inspiring as her uncle. Please pray for President Carter and his family during his healing process.”

But then the church reversed itself on Tuesday.

“We are proud and relieved to announce President Carter has changed his mind and decided that he feels well enough to to teach,” the church wrote on Facebook. “Please join us to welcome him back! We will live stream for those who can’t be with us.”

The church’s pastor, Tony Lowden, said last week that Carter was in “great spirits” and that the two prayed together, according to CNN. “He’s down that he can’t teach Sunday school,” Lowden said after Carter missed classes last week.

The one-term president, who served from 1977 to 1981, was awarded the Nobel Peace Prize in 2002 for his work with the Carter Center to promote and expand human rights and fight disease.

Last week, he was admitted to Phoebe Sumter Medical Center for a minor pelvic fracture, said Deanna Congileo, director of communications for the Carter Center. On Thursday, October 24, the Carter Center announced that he had been released.

“He is looking forward to continuing to recuperate at his home in Plains, Georgia, and thanks everyone for their kind wishes,” Congileo said in a statement.

Shortly after turning 95 on October 1, Carter fell and hit his head while getting ready for church, requiring 14 stitches above his brow. In spite of that, he still traveled to Nashville that afternoon for a week of building houses with Habitat for Humanity, which provides homes for poor people and with which Carter has worked for many years.

In December 2015, after months of treatment for melanoma in his brain and liver, Carter announced that scans found no traces of cancer in his body.