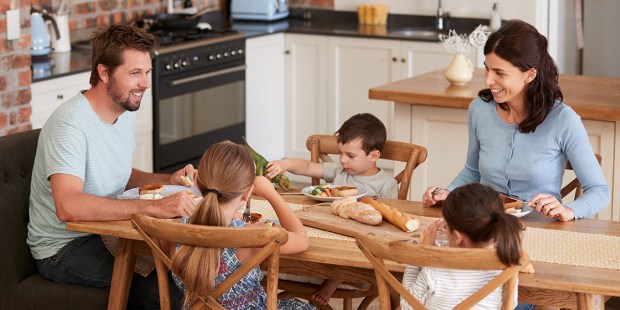 According to research (and experience), pressuring kids to try food doesn’t help … and sometimes it can hurt.

Like all of my parenting methods, the way I introduce foods and handle picky eaters has evolved significantly over the last 14 years. When my two oldest were toddlers, we employed the tried-and-true (we thought) “clear your plate” method … and endured the many protracted battles of the wills that came with it. Then I learned that forcing kids to finish a meal programs them to override their body’s natural satiety signals and can establish a life-long pattern of overeating, so we kicked that strategy to the curb with gusto.

Then we tried the “vegetables first” rule, which resulted in many nights locked in that same old battle of the wills with growing numbers of toddler-to-elementary aged children. I ditched that method out of sheer self-preservation, replacing it with the much more reasonable “three bites” rule. They had to take three bites of everything offered or they got nothing else to eat that night. Sometimes the prerequisite bites granted them access to seconds of something they had inhaled. Sometimes it gave them access to an alternative like cereal or toast. And on bad nights when my willpower and energy were sapped, three bites could open the gates to dessert … even if those bites fell far short of a complete meal.

The 3-bites rule has more or less been the standard since then. Since I started working, I’ve adapted to cooking simpler meals and have a running rotation of healthy options I know they’ll all eat, even if they complain. But sometimes they balk, and even three bites becomes a herculean task, especially for my 3-year-old.

But recently I discovered that he eats a wide variety of food — including raw carrots and sugar snap peas — at childcare, without complaint. When I asked his childcare provider how she manages to get him to eat them, she shrugged and said, “I don’t. I just put the plates on the table, and the kids are free to eat their food or not. When the meal is over, the plates go away and nothing else is offered. They all pretty much eat everything, and when they don’t, I don’t even mention it.”

I was thunderstruck by the simplicity and wisdom of this approach. No pressure, coercion, bribery, or alternate options — just set a straightforward meal on the table at dinnertime and let those who want to eat, eat.

As it turns out, this strategy is supported by many studies that have found that pressuring kids to eat foods they don’t want to eat — even just one bite! — not only fails to help them become less picky over time, but can also backfire and result in lower energy intake, lower fruit and vegetable intake, and even eating disorders later in life.

So I let go of all my strategies, rules, and dinnertime trench tactics and started just making the food and serving it. Everyone has to sit at the table at dinnertime, but no one has to eat. I eat, usually with gusto because by the end of the day I’m starving. My teenager usually eats with equal enthusiasm. And after the first few nights of whining, begging, and negotiating, the rest of the kids followed suit. They started just … eating their dinners. Shockingly, on most nights they tell me with surprise that “This is actually pretty good, Mom.” And they often ask for seconds, even of the vegetables.

I wish I had realized 14 years ago how easy it is to get kids to try new foods, but as a new mom I was consumed with doing things the “right” way. I was worried about their sleep and their nutrition and convinced that if they didn’t eat at dinnertime, they would surely perish of starvation overnight. Now, I know that the right way is often the simplest, most intuitive way.

Read more:
9 Tips to resist the temptation of overeating