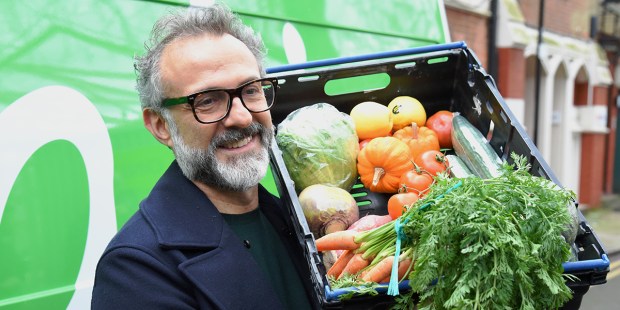 It’s an open secret in the culinary world that the best cooks are grandmothers, whose decades of dishing up nourishing family meals every day is the surest kind of hard-won expertise. As one famous chef said, “If you think about grandmas, they are some of the most experienced cooks in the world.” So it’s no surprise that Massimo Bottura, one of the most celebrated international chefs, credits his mother and grandmother with his culinary career.

“This is where my passion for the kitchen began, at the feet of the women I loved most,” he said, describing his grandmother, Ancella, and his mother, Luisa.

“As a kid, I was always under the kitchen table. It was my refuge from three older brothers’ torments and threats. I found peace at my grandmother’s feet as she rolled out the dough for tortellini, among the smells of broth and roast meats … with flour falling from the table sides and a handful of raw tortellini stolen when their backs were turned.”

He’s come quite a distance from that quiet family kitchen, but the idea of the kitchen as a safe and welcoming place continues to shape his life’s work. Today, Bottura owns and runs Modena’s famous Osteria Francescana, a restaurant that routinely tops best restaurant lists. In 2016, he was voted the number one chef in the world, and he recently starred in Season 2 of the TV show Master of None. Most impressive of all, however, is Bottura’s commitment to charity, which has taken an unusual and ingenious form: his non-profit organization Food for Soul.

Food for Soul operates a growing network of soup kitchens around the world. But these are soup kitchens with a fresh, sustainable twist. Famous chefs cook the meals, and they use food ingredients that were deemed unsuitable for sale in supermarkets and otherwise would have been thrown away. These soup kitchens are called refettorios, or “refectories” in English, after the rooms in monasteries where monks gather to share their daily meal. The goal is for these centers to offer a monastic spirit of peaceful restoration and warm welcome to guests. Bottura says he wanted a place where people whose lives were all about being shut out could have at least one hour in the day when they could “enjoy the pleasure of a beautiful meal in a beautiful place.”

The first Refettorio began as a pop-up for the Milan World Expo in 2015. Bottura had been invited to cook for the grand opening, but instead he chose to celebrate the greatest Italian export: hospitality:

The original plan was to create a kitchen at Milan’s central station, in which some of the world’s greatest chefs would be invited to cook alongside him for the city’s homeless… At the time, the station was overflowing with refugees journeying north from the southern ports. It was, by Bottura’s account, the Pope who changed his mind about the venue.

Through the Catholic charity Caritas, Bottura’s idea reached the Vatican. Pope Francis wondered if it might become a more sustainable gesture. Why not site Refettorio in one of the blighted quarters on the city’s periphery? He put Bottura in touch with the parish priest in Greco, Don Giuliano, who suggested a derelict theatre next to his church as a venue, and an unlikely partnership was born – one which has led to a full-time commitment to serve Greco’s homeless and refugee population every day.

The Refettorio concept caught on and began to spread. Another was opened in Rio de Janeiro for the 2016 Olympics, followed by two others in London and Paris.

Although the first two Refettorios were created for major events, the concept has evolved far beyond its temporary roots. These are community kitchens built to last.

Now Bottura has set his sights on bringing the concept overseas, after receiving a $650,000 grant from the Rockefeller Foundation to open at least two Refettorios in the USA. One is slated to open in the Bronx in the next year. The location for the other has not been decided, but Bottura has mentioned possible candidates including Miami, Detroit, New Orleans, and Chicago.

Bottura has stayed faithful through the years to his vision of the kitchen as a source of companionship, warmth, and peace. At the heart of it, he is continuing the work that his mother and grandmother began when they spent decades cooking for their families, day in and day out. He’s simply expanding that loving service to include many more people.

“This reflects the way I grew up, the values that my mom and my grandma gave me,” he says.

One can only imagine how proud Ancella and Luisa must be, as their son and grandson takes the cooking skills they taught him and uses them to serve the “least of these,” as Christ asks.

Read more:
How I discovered the art of cooking in Rome